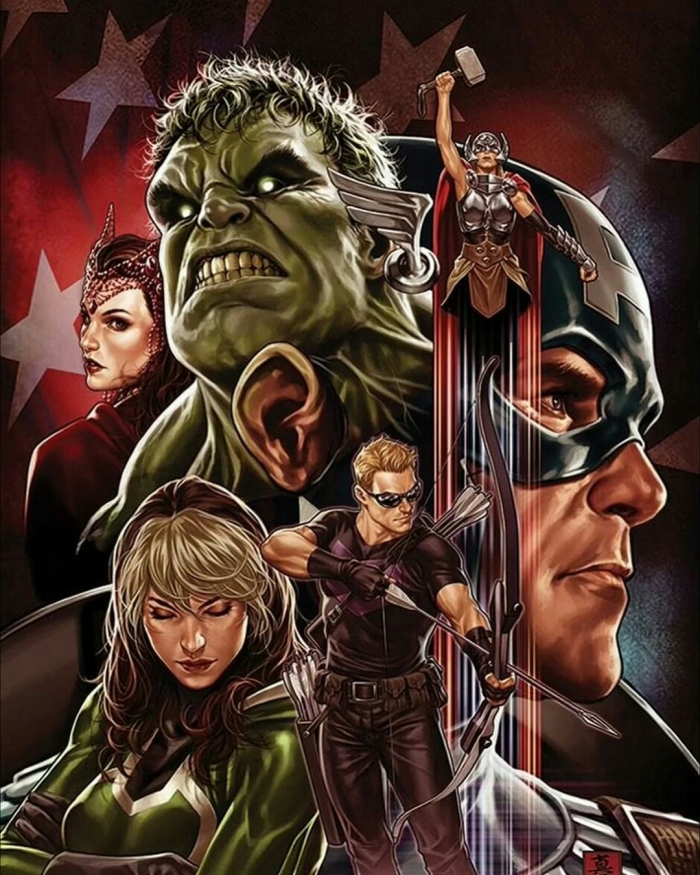 April saw records broken by Midtown Agent Flesh with an impressive total of 154 points in a four week month! This gave him the #2 placement for individual players over the whole season. Overall, the Agents worked together to score a massive 461 in April, locking in second place for April. However, with a massive 1,454 points Midtown was the highest scoring division for season 1 of 2018! Massive congratulations to all Agents!

Midtown’s heroes fought hard and over 140 appearances, used 125 powers and teamed up 100 times! We had 25 team leader, saved 11 civilians and defeated 23 antagonists while experiencing a massive 37 character defining moments.

This month, only three of the four heroes of the were rostered; with Doctor Strange, Captain America and Rogue scoring large for Agents Chris, Flesh and Natalia (respectively) while Storm’s ranking on this list took us by surprise.

Captain America narrowly edged out Falcon to become Midtown’s highest scoring hero of the month; trailed by Parker, Rogue, Thor and Ms Marvel. While surprise draft Black Widow had the highest number of points per appearance (by a large margin!).

There was no catching Agent Flesh this month who managed to nab the three highest scoring heroes. There wasn’t much of a shake up to his roster as only Falcon was a new draft, but it clearly paid off! Topping five out of seven scoring categories (appearances, powers, team up, lead team and save civilian), he was unstoppable. Massive congratulations, Flesh! Agent Chris had a strong showing from all four of his heroes and managed to edge out division lead, Agent Natalia, for second place. Securing him the season win! After losing Falcon to Flesh, Chris kept his hands on Hawkeye and teamed him with Doctors Voodoo and Strange before rounding out his team with Ms Marvel.  Agent Natalia slipped to third in the final week of the month after keeping three out of four heroes from her previous team; Rogue, Thor and Scarlet Witch teamed up with her favourite hero; Black Widow. Natalia was the only Midtown Agent to top any category other than month winner Agent Vin. Taking the top spot for defeating antagonists and character development. Agent Broadway narrowly edged out Agent Len for fourth spot this month with 56 points to 55. Black Panther and Wasp stuck around for April while Gambit and Magik joined the party. T’Challa stood out as her most valued player while the other three heroes kept up a steady pace. Agent Len suffered the well known ‘first to worst’ curse this month following last months win and the loss of her entire team. She managed to salvage Scarlet Spider and Deadpool and teamed them with Hercules and Cannonball for a close finish with Broadway. Her heroes fought a good battle and contributed to keeping Midtown safe!

Massive congratulations to all agents and thank you for your continued commitment to Midtown and the Fantasy Comic League. Well done Vin on your record breaking and to Chris for the overall win on your first season! (If you need any suggestions for what to get, let me know!)

Season one may be over. But season two is about to begin… Good luck to all! 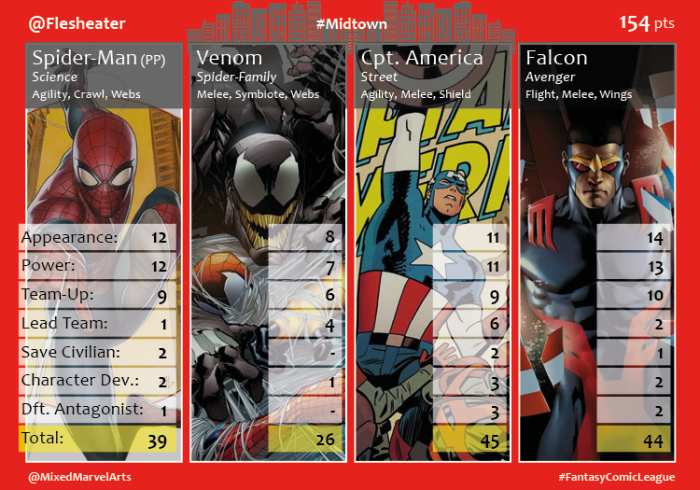 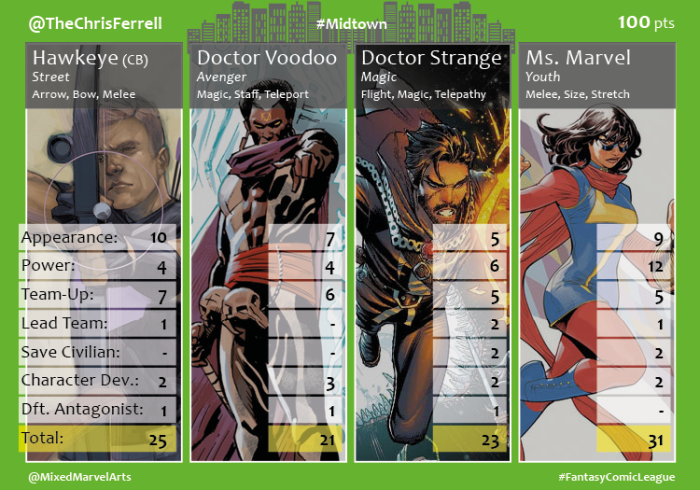 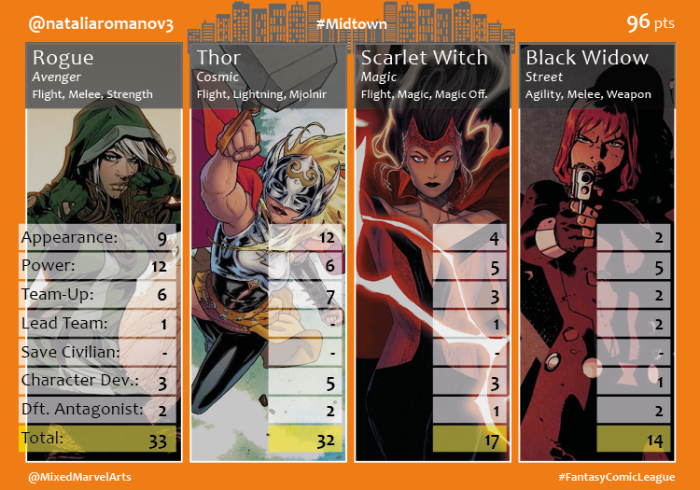 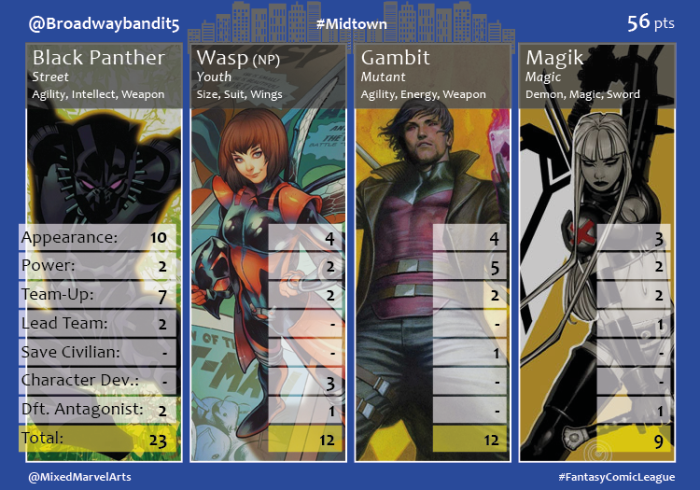 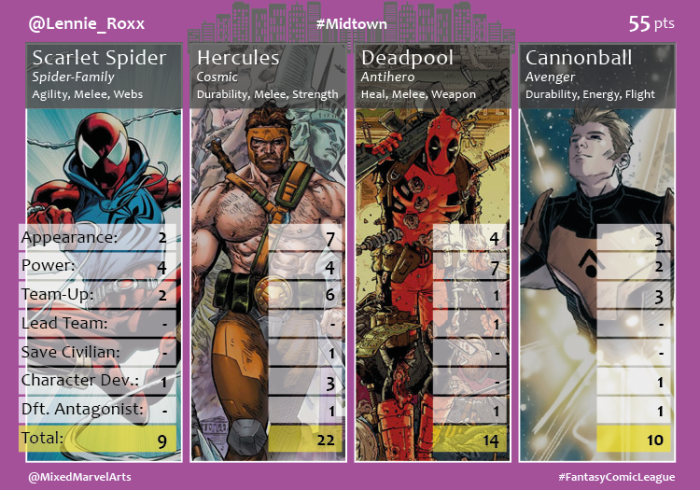