Hey Y’all, Agent Martineau here. This is the final Multiversal Check-In for the Mixed Marvel Arts. Fear not, the Multiverse continues on, being guided by myself and the Future Foundations to come, but the Mixed Marvel Arts will cease to be and we’ll be rebranded as The Fantasy Comic League going forward (it’s really just cutting a handful of words out of the title).

It also saw some big moves on the Cosmic Event front, as we got not one, not two, but four chapters of Venomized; as well as the finale of Doctor Strange: Damnation, the continuing Countdown to Infinity, and the end of an era for several Avengers team in during the No Surrender Finale.

We also saw Tessa Thompson’s Valkyrie from Thor Ragnarok make her comic book debut in Saladin Ahmed’s Exiles #2, while Gail Simone celebrates Domino’s first live action role, by the wonderful Zazie Beetz, with a new number one for the luckiest mercenary around in Domino #1. Finally, we kicked off a number of mini series as the Hunt for Wolverine began with the aptly titled Hunt For Wolverine #1.

So how did our Agents do? Agent Brat banked hard on that Infinity War horse and while Thanos and Gamora had the most screen time in the third Avengers film, that did not translate to the printed page. Gamora and Thanos scored less than twenty points combined and Brat’s team scored only 46 points.

There is a considerable gap between Agent Brat and the next two Agents, who fought a hard battle and scored 74 and 75 points. Sadly, not even Peter Parker could carry Agent Demo to glory, as he scored 74 points. Agent UN took the one point lead, thanks to strong performances from Rogue and Venom.

Agent Martineau fought hard to win, breaking 100 points for a total score of 101 points. His team was lead by his sharpest Avengers, Hawkeye, who scored a new high score of 27 points under Agent Martineau’s guidance. His other team members broke 20 as well, for an incredibly well balanced team.

Still, Agent Martineau could not beat Agent Doge, who after sitting on the sidelines all season, came hard in the final month. Moon Knight was his weak spot, with only 12 points, but Falcon scored a whooping 44 points and was well supported by Thor (29 points) and Ms. Marvel (31 points). Agent Doge will not be returning for the next season, but at least went out on a high.

So how did the final standings go? Well, there was a three way tie, which was broken by overall points during the first 2018 Season.

Once again, I, Agent Martineau, have proven myself to be the Master of the Multiverse. Despite a handicap of my #AltWhite team in February, I came to play for the other three months. I would like to dedicate this victory to Clint Barton and the AltWhite team. I will also like to congratulate Agent Demo, on scoring the largest portion (286 points) of Multiverse’s overall 1321 point haul. That’s all folks, I look forward to seeing you all in the new season at FantasyComicLeague.Com. 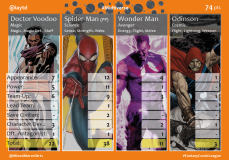 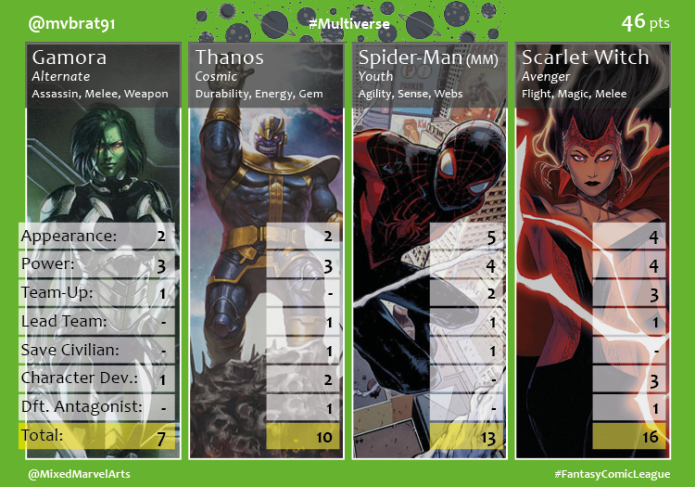