The coup to overthrow the provisional leadership in Latveria has come to a head as Lucia von Bardas reveals herself to be the conniving culprit. Several heroes from the Marvel universe make their way to the frontline of the battlefield and come to the vulnerable country’s defense. Leading the charge is the young Spider-Man and his allies known as the Champions. They join forces with the Agents of the #FantasyComicLeague and fight against the would-be dictator and her felonious allies, Sandman, Electro, Hobgoblin and a new spider-based adversary. Details are still pouring in, but it seems that this fight is about more than just the fate of a country. Spider-Man and his foe, the mysterious Iron Spider, seem to be waging a personal war among themselves!

As battles around the globe begin to wind down, the Avengers persevering over the cosmic Grandmaster and Doctor Strange battling his way out of Hell, the fate of Latveria remains uncertain at the end of the season. However, the Latverian Fantasy Comic League agents continue to perform admirably. They save eight civilians caught in the middle of the superpowered firefight and put a stop to 15 antagonists’ dastardly plans. In the final month, the majority of the drafted heroes all experience character defining moments, but none more so than Thor, the Thunder Goddess. She had five instances of character development throughout the month.

Agent @sotonspidey continued to bust out of his slump with a 130 point finish to the month. Had another division not reported in with an even more impressive performance, soton would have set a new league record. Not a single member of soton’s team let him down as Hawkeye was his lowest scorer with an impressive 25 points. In second place, Agent @SuperiorComic16 benefited from having the top scoring hero for the month on his roster. Falcon scored 44 points and pushed Superior to a 112 point finish. Agent @KingofTysons started over with a new team of heroes after his first-place finish, but he managed to recover with a team of favorites including Gambit and young Cyclops. King scored 69 points, which was one point off of his previous monthly total. New recruit Agent @JamesBSheppard finished his first season in the league with 59 points. He stayed moderately consistent throughout the season as he continued to learn the ropes. Doctor Strange and Black Panther more than made up for a weak showing by Ant-Man and Bruce Banner. In his last season with the League, Agent @adameastment chose to draft a quartet of personal favorites. Unfortunately, those heroes have been kept out of the spotlight for some time and his best performance came from the Infamous Iron Man who scored 13 points, more than half of adam’s 24 point total.

That wraps up the first season of the Latveria Fantasy Comic League! Congratulations to all Agents and a productive and successful defense of Latveria! But as usual with the volatile country, the peace is hardly expected to last! 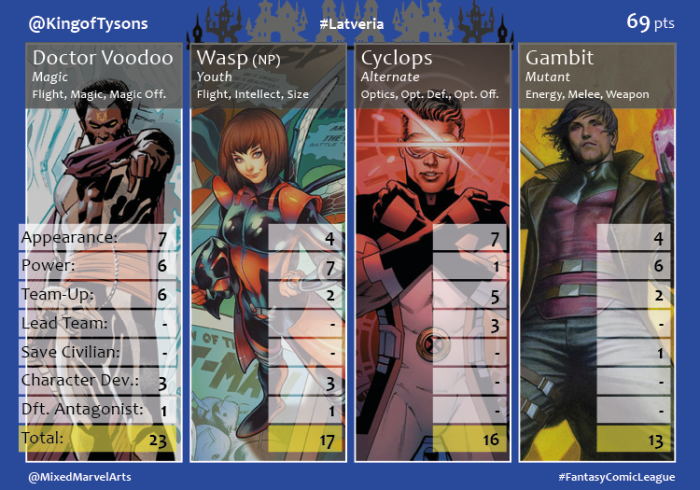