I am the Living Tribunal, the cosmic judge of the universe. In this age, we bring reverence to the heroes of both old and new by blessing their stories with the numbering of a past age. It is from here that we continue to tell our legacy. The first order of the court is to acknowledge the great and powerful Serendipity (81), who with the neighborhood friendliness of her whimsical Spider-Man and the help of Thor, Daredevil and Ms. Marvel, she was able to claim a close victory over the studied and wise Rob C. Young. At 79 points, Rob proves that no matter the order of selection he makes no mistake in his choices. The Young Scott Summer miraculously out performed his expectations with strong shows of both Falcon and the Hulk behind him. Though the IVWall (64) had the excessively loquacious Deadpool leading his charge, the Merc could hardly carry the meager numbers brought in by his teammates, and settled for the 3rd slot. Meanwhile Xi showed how powerful the X-men could be in their prime, but when they turned to the rear, they found that Steve Rogers was “Knowhere” in sight, contributing absolutely no points to his team. Finally DatOne choose women of power, and though that they are, only the Goddess, Storm put up any truly notable numbers on the board, earning her team the final slot. My judgement has been passed. Until next time, when the Living Tribunal returns. 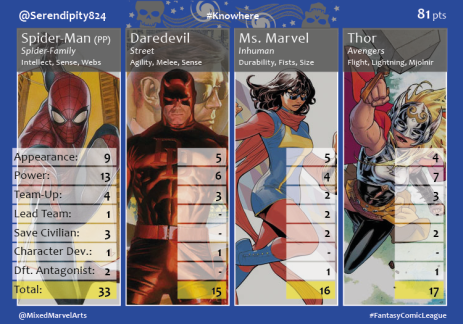 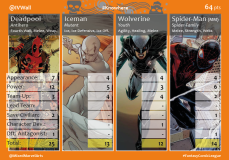 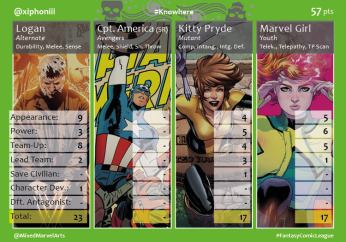 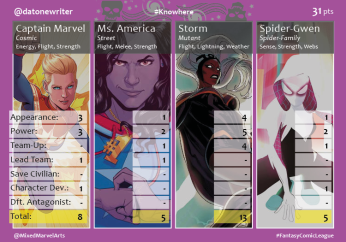