I am the Living Tribunal, the cosmic judge of the universe. In this age, we bring reverence to the heroes of both old and new by blessing their stories with the numbering of a past age. And from here we recognize first the strength and valor of the Amazing Spider-Man (33) and the Old Man (27) who with their powers combined helped to give Agent Xi a most resounding win (90). And while not coming anywhere close to Xi’s cosmic magnificence, second is Agent Sceritz (58) with solid work from each member of his team, lead by the X factors. Beneath him, DatOne (47) proved her mettle with the out showing of Ms. Marvel and Storm, while the dimension star hopping America decided to sit out from most of the action. Agent Robert (44) followed close behind, with a decent run from Iceman and a modest performance of Falcon, but with the others scoring so low, he could not nab the third slot. And lastly, Agent Seren’s (38) Moon Girl nor the Goddess of Thunder could quite rally the rest of her team into action.  My judgement has been passed. Until next time, when the Living Tribunal returns. 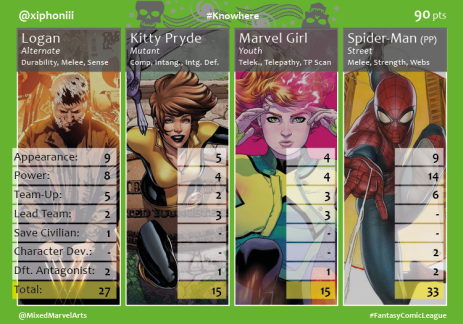