Hey everyone, we’re working on launching new features for the Mixed Marvel Arts Blog and one of those will be daily news recaps along with our opinions on the stories of the day. We hope you enjoy it enough to leave a comment down below.

First up, rumor has it that The Wolverine team of director James Marigold and actor Hugh Jackman are in talks to make The Wolverine 2. I had been leaning towards Jackman putting in his swan song with Days of Future Past and going out in style, opening the doors for other mutants to step into the spotlight Wolverine has been hogging. It seemed like Fox was moving ahead this way, with X-Men film projects like X-Force ( to be directed by Jeff Wadlow) going down different paths after Days of Future Past. That might not be the case though and I will admit that I’m excited at Marigold coming back for another X-Film. Both he and Matthew Vaughn (director of First Class) brought a lot to the X-Universe and I’m curious to see what additional news will come out in the future in terms of adaptation material. 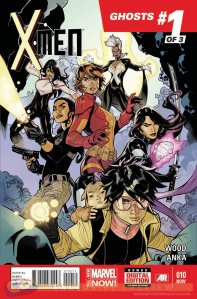 The answer to Marvel latest one-word bullshit teasers is upon us; Resurrection by Brian Wood and Kris Anka will be an upcoming arc in X-Men, running through Issues 10-13; it’s not a Generation X book like I had been hoping. The story will have our female-led team go up against the Sisterhood, whose members include Lady Deathstrike, Enchantress, and Typhoid Mary. The Sisterhood is looking to resurrect a powerful mutant, one whose downfall was the X-men. It is currently unknown who is being resurrected, but some names being thrown around are Madeline Pryor and Seline the Black Queen.

Uncanny Avengers #14 threatens to shake the Marvel Universe to its core and promises a death. Though they’ve been talking about Logan kicking the bucket for a while, it looks like Rogue could also be on the chopping block; she’s oddly missing from the X-Men #10 cover. The exact solicitation reads:
•  How many Avengers must die to stop the Apocalypse Twins?!
•  Wolverine fails mankind. Daken has his revenge.
•  Wanda confesses her true love. Grim Reaper has his revenge.
•  A heart-wrenching and desperate tale of betrayal, love, revenge and sacrifice.

And the biggest news of the day has to be the announcement of a new Ms. Marvel, and her new creative team. She is Kamala Khan, a shape-shifter inspired by the original Ms. Marvel, Carol Danvers. Her series will be told by writer G. WIllow Wilson (an Islamic woman) and artist Adrian Alphona (known for bringing incredible Runaways team to life with Brian K. Vaughn). Kamala’s story started with editor Sana Amanat, whose own experiences of conversion to Islam defined her upbringing. A teen book which focuses on a diverse character, and one of my favorite artists in comics? I’m on board a hundred percent with this comic and hope it does well.

That’s it for today folks. I’ll leave you with the latest and best Thor 2 trailer, which stars everyone’s favorite God of Mischief. Hope y’all enjoy Agents of SHIELD tonight.