The Agents of #Asgard of the #FantasyComicLeague take a moment of silence to mourn the loss of our sister, our hero, and our inspiration, the Mighty Thor. May we all aspire to be as worthy as the star who shines brightest. She was and forever will be the best of us.

Those of us of Asgard are warriors, even sages such as myself. So, despite our loss, we must press onward. The Mighty Thor would expect nothing less.

In the third month of the season, the quarry proved elusive and cunning, but still the Agents of Asgard came together and performed admirably. The veteran leader, Agent Lori (@LoriHyrup), set the pace and held the lead for the first three weeks of the month, but a spectacular finish by Agent Seren (@Serendipity824) snatched victory away from her competition. Both Agent Seren and Agent Lori finished with 58 points. In the event of such a tie, the decision comes down to the Agent with the squad member who performed the best. Agent Seren’s Peter Parker, the Spider-Man, outperformed Agent Lori’s Rogue, 23 to 22, respectively.  In addition to Spider-Man, Agent Seren’s team consisted of Hawkeye, Synapse, and of course, the Mighty Thor herself. Agent Lori’s Rogue was joined by Deadpool, Beast, and the young lass, Nadia Pym. Agent Seren’s performance all but proves her true heritage as an Asgardian.

Agent Cham (@Cham_Arrow) settled into a comfortable 42-point, 3rd place performance, with the fierce Black Panther and mysterious Doctor Voodoo leading the charge and the Scalet Witch and Gamora protecting his flank.

Our enlightened Agent Pom (@pomwonderland) awoke from her meditations and began testing the waters, finishing in 4th place with 29 points with her squad, led by the flames of Hel himself, the Ghost Rider. He was joined by Falcon and the incarcerated X-men, Storm and Kitty Pryde.

After finishing first last month, Agent Geeks (@GeeksGoneWildTw) enjoyed a tankard of mead and a helping of humble pie as he brought up the tail of this month’s competition with just 20 points. Of his team consisting of Doctor Strange, Thor Odinson, and the two Wolverines—Laura Kinney and James Howlett—not one brought in over 10 points. Despite the loss, the young warrior appears to be in good humor and ready to compete again for the final month of the season.

I wonder if the Great Library of Asgard survived the assault of the Mangog. I need to the check records to see if I can identify who could possibly be an ancestor of Agent Seren. If I could locate such a record, that would be proof even the All-Father could not refute.

The Saga of Asgard continues… 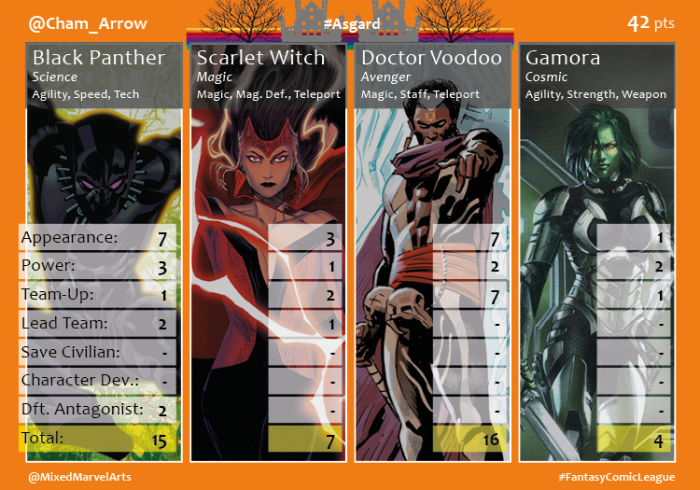 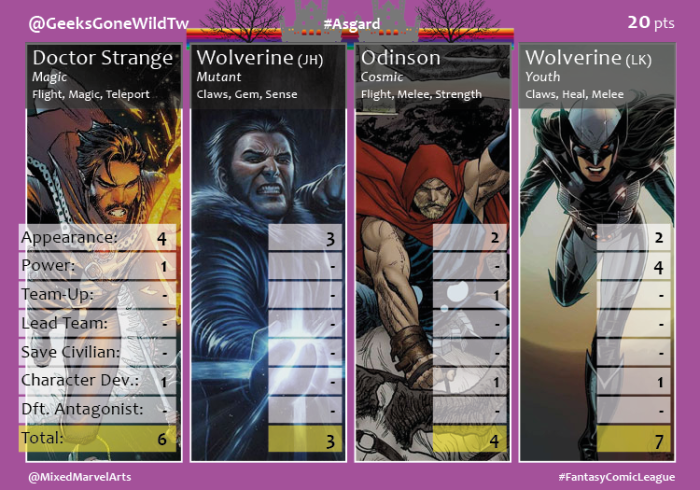