The entire globe watched as the World of Wakanda was center stage this month. How glorious it was to see King T’Challa, the Queen Mother, Princess Shuri and the Dora Milaje portrayed in such a manner.

Although the villainous Klaw continued to make his presence known by causing havoc in Wakanda, the Elite “S” Squad was not to be outdone. With the aid of other Dogs of War units, the Squad was able to bring in 341 points for the #FantasyComicLeague by saving 11 civilians, defeating 12 adversaries and navigating 17 life changing events.

A back and forth battle for Hero of the Month occurred between T’Challa, part of Agent Sistah’s team and Peter Parker, part of Agent Snikt’s team. Both Black Panther and Spider Man pulled out two solo “Hero of the Week” titles but ultimately, it was Agent Snikt (@NickZG) who would prevail in the standings. With his team of heavy hitters such as Peter and Wade, Agent Snikt unabashedly brought in 98 points and locked down first place. #Wakanda Division Leader, Agent Sistah (@S_Hero4Hire) secured second place with 89 points. Her own powerhouse #TeamAlwaysBetOnBlack consisted of the King of Wakanda and Falcon who together brought in 65 of her points. Coming in third and brandishing her own formidable team starring Thor, Storm and Venom, Agent Sha (@La_Ney_sha) brought in 68 points. Rogue and Hulk steered Agent Super (@supercurrymax) to a fourth place finish with 48 points. Holding down fifth place was Agent Shaw (@Notingshaw), whose 38 points was mainly earned from Dr. Strange and sporadic appearances of Squirrel Girl and Jessica Jones.

There will surely be a shakeup in the next battle for points in the Land of Bashenga.

The Wakanda Caucus is now in recess… 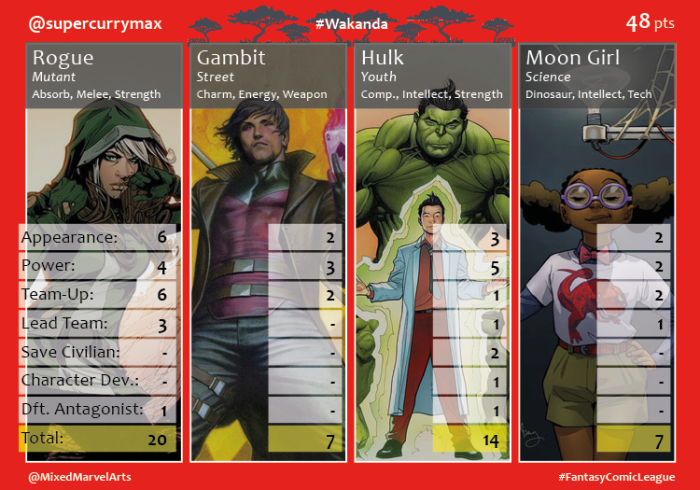 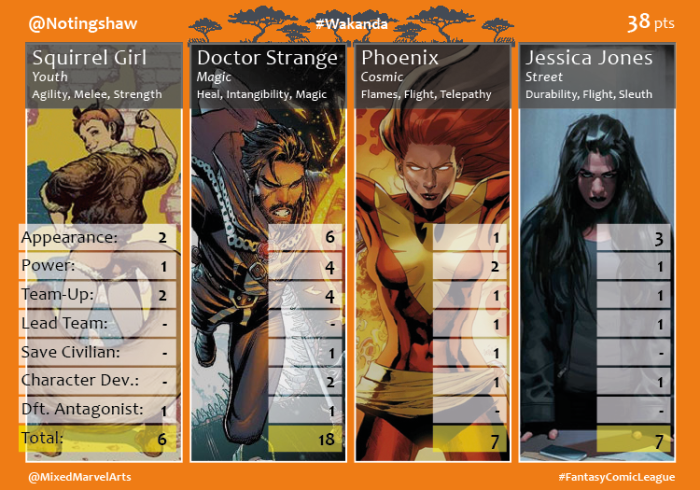