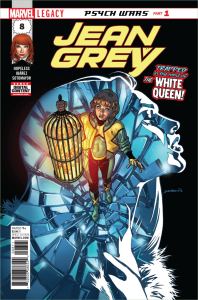 Like a Phoenix from the ashes, Jean Grey rises to the top of the Fantasy Comic League tier charts. The young Marvel Girl dives into the psyche of her future foe, Emma Frost, in her own book, while leading her team of X-Men in the next chapter of the Mojovision crossover. Jean scores 13 points in her “Hero of the Week” performance. Daredevil followed close behind in second place with 12 points thanks to a strong showing in Moon Girl book, which also dealt with the X-Men’s spineless villain, Mojo. Punisher benefited from the inclusion of his MAX imprint book, The Platoon, which helped him earn third place and 11 points. Wolverine secured fourth with seven points, boosted by two team ups in her two appearances for the week. Logan and Peter Parker had more modest weeks compared to their more recent runs, scoring six points each while tying for fifth place.The remained of the top ten consisted of a five-way tie for seventh place. Beast and Kitty Pryde continued the X-Men’s dominance this month, while Ms. America, Moon Girl and Captain Marvel each had strong performances in their solo books. Young Cyclops, who has had one of his best months, finished with only four points in his final week, same as another Fantasy star, Deadpool. Steve Rogers, as expected in the appearance previews, scored no points throughout the month, but that will change when his new solo title drops in November.