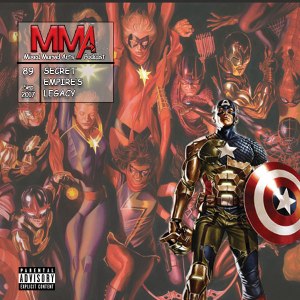 The Mixed Marvel Arts Podcast is not so great at keeping secrets Brian and Shaun spill all the details about Marvel’s most recent comic event, Secret Empire. Shaun has a lot to say about Nick Spencer’s capstone story to Hydra Steve Rogers and the impact the Generations one shots have on the Marvel legacy characters. Brian provides a quick review of Marvel vs. Capcom: Infinite, the next chapter in the popular fighting game series. In the end, the hosts review the Fantasy Comic League points for the month of September, the first month featuring four divisions. Lannette phones a friend in the beginning of the episode to discuss her options in the draft.  Episode artwork: Promotional artwork for Marvel’s Generations event by Alex Ross; Cover artwork for Secret Empire: Omega, vol 1. #1 by Mark Brooks.

Thanks for listening, and please continue to follow us on our social media accounts for all updates and news about future recordings! For more information, questions or general comments, be sure to reach out to the hosts on Twitter @mixedmarvelarts. Please also remember to like us on Facebook and subscribe to the podcast via iTunes. Don’t forget to leave some feedback!