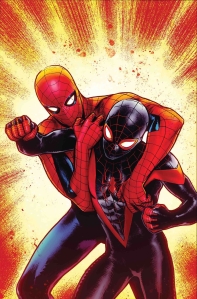 As the year begins to wind down, the Marvel heroes make a final push to pad their statistics before 2017 ends, but Peter Parker looks to lock down his spot at the top of the charts in November! The original Spider-Man has a comfortable lead in the tier rankings with his estimated appearances reaching double-digits. The younger Spider-Man also makes the top-tier thanks to the conclusion of the Spider-Men II event. They both benefit from the final chapters of the Avengers and Champions crossover event coming out in November. Miles is joined by fellow Champions Cyclops and Ms. Marvel in the top rankings. Old Man Logan has been one of the stronger challengers to Spider-Man’s league domination throughout the year, and this month looks to be no different. Logan has plenty of appearances and team up potential between the X-Men crossover and his battle with Wade Wilson in Deadpool vs. Old Man Logan. Apart from the typical heavy hitters, the rest of the tier chart looks to be bottom heavy as most of the ranked heroes are expecting two or fewer appearances. Outside of the Avengers, Champions and X-Men crossovers, several team up opportunities exist for Wolverine, Ghost Rider and Moon Girl. Character moments abound for Steve Rogers as he kicks off a new chapter and new series as Captain America; Loki takes up the mantle of Sorcerer Supreme. After a month under review, the Punisher Max book has officially been deemed not eligible to count for our mainstream Frank Castle.

Best of luck to all divisions of the Fantasy Comic League: #Midtown, #Multiverse, #Wakanda and our new division, #Knowhere. Power rulings and definitions have been revised based on participants’ review in the previous month. Please see the attached Power Summary file for further power clarifications. Please follow along with our #FantasyComicLeague tweets on our Twitter for official power scoring and discussions. Seasons run for four months, stay tuned for your chance to join the official league and win a trade paperback of your choice!