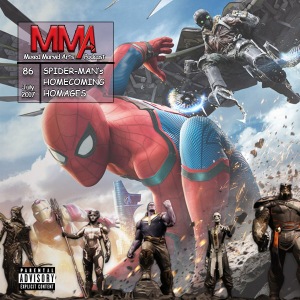 The Mixed Marvel Arts Podcast is doing a Happy (Hogan) dance after watching Spider-Man: Homecoming. Brian and Shaun are pleased with Sony and Marvel’s joint offering which helped rejuvenate the Spider-Man movie franchise. Tom Holland nailed the duality of the hero, while the rest of the cast enjoyably expanded Spider-Man’s own little corner of the Marvel Cinematic Universe. Brian’s only skepticism was at the depiction of Peter Parker’s classmates, while Shaun cheered the role of one of his favorite actors in the film. Both of the hosts appreciated the many homages to other pop culture entertainment strewn throughout the movie. Unfortunately, things are not as happy in the beginning of the episode, as Brian and Shaun mourn the loss of some celebrities, as well as being denied the Avengers: Infinity War footage from the Disney Expo! Episode artwork: Promotional art for Sony Pictures Releasing’s Spider-Man: Homecoming; Promotional statues of Thanos and the Black Order from Avengers: Infinity War at Disney’s D23 expo.

Thanks for listening, and please continue to follow us on our social media accounts for all updates and news about future recordings! For more information, questions or general comments, be sure to reach out to the hosts on Twitter @mixedmarvelarts. Please also remember to like us on Facebook and subscribe to the podcast via iTunes. Don’t forget to leave some feedback!