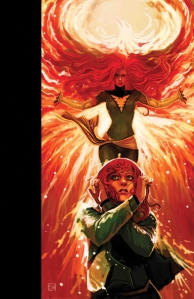 Jean Grey is no longer the character we knew, she is life and fire incarnate. For the first time, she is the top hero in the Fantasy Comic League! In the second week of August, “Generations” spotlights another character and gives them the boost they need to earn the “Hero of the Week” title. The young, pre-Phoenix Jean Grey scores 13 points. From Marvel Girl to Ms. Marvel, Kamala ties Rocket Raccoon for second place with 11 points, but the young Inhuman earns her points in two books compared to the Guardian’s three. The good guy Captain America inspires the heroes with his 10 points and ranks fourth. Peter Parker defends his company from Doc Ock’s hostile Hydra takeover and scores eight points, good enough for fifth place. Moon Girl continues a team up with longtime Spider-Man antagonist, Venom, and scores seven points for sixth place. Star-Lord scores six, and then Steve Rogers, Jessica Jones and Logan round out the top 10 heroes with five points each. Daredevil, who has dominated Fantasy Comic League appearances the previous two months, is conspicuously absent for the second week in a row.