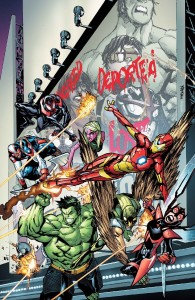 Marvel’s Generations event kicks off by seeking to decide just which Hulk is the strongest! The Fantasy Comic League starts slow in the month of August, but Amadeus Cho’s team up with the original Hulk, Bruce Banner, puts him at the top of the charts. The Totally-Awesome Hulk earns yet another “Hero of the Week” title with an impressive 13 points. Deadpool’s conflicted nature, namely his loyalty to Steve Rogers testing his wish to be one of the good guys, puts him front and center of the Avengers comic focusing on Steve’s Hydra-Vengers. Wade snags seven points for second place. Kate Bishop returns to the League and manages a six point performance in her solo issue, good enough for third. The two Spider-Men tie for fourth place with five points each, while Ironheart and Jessica Jones are close behind with four points a piece. Odinson is the only other hero to earn points this week (8 heroes out of 28 drafted) thanks to his members on the Hydra-Vengers as well. Overall, only 7 of the 13 eligible points featured drafted heroes. Two big team books – All-New Guardians of the Galaxy and X-Men: Gold – failed to showcase any League members, resulting in a slow week to the final month of 2017’s second season.