As the forces of good rise and fall, and empires are built and toppled, the Agents of the Wakandan Roundtable continue to serve their causes, no matter how honorably noble, or surreptitiously sadistic. This month, Agent Sceritz (76) proved that his team, of brawn and intelligence, psychic prowess, old experience, and charismatic dance skills can trump even the most fascist of empires. Amedeus Cho smashed with a total of 26 points to bring his team to the top. Meanwhile, Agent Soton’s Spiders and the Supreme Leader himself came to a stalemate in battle against Agent Seren’s ragtag team lead by Ms. Marvel. While she and Ironheart were the analysis and battle planners, Rocket went in guns blazing with Daredevil doing his blind master thing and scoring 19 points. Though both Spider-Men scored an even 18 points, they still couldn’t quite overcome Agent Seren, and they tied at 52 points apiece for 2nd place. Following up is Agent Sistah Geek (44), who seems to have played the waiting game this month, keeping cool with Deadpool leading with 17 points, with Luke Cage on his heels. Gamora did her part with Cable scoring only 2 points. (Perhaps he was lost in the time stream again?) Lastly, is Agent Super with his usual team of loyal men and women. The X-Men leaders, Storm and Scott were accompanied by Viv of the Champions and Thor herself, scoring a total of 25 points. The battles are many but it’s no secret that the true war is waged between Agent Sistah Geek who has a total of 7 points against Agent Sceritz who also has 7. Who will win the final month of the quarter? Let us see what happens in August… 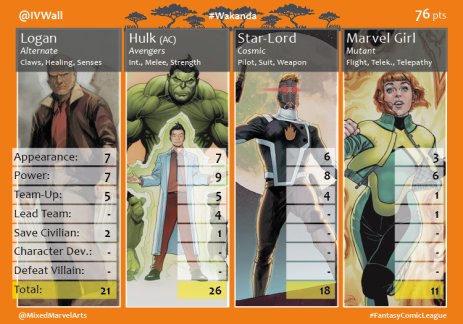 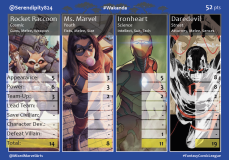 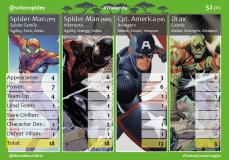