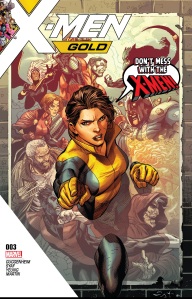 Recap (with commentary): Let me start off by saying that I love this cover by Adrian Syaf; it is so old school that it has a word balloon, something we do not see often these days. Returning to our regularly scheduled recap, we immediately start with Old Man Logan fighting the new Brotherhood till he gets burnt by Magma. You can tell more and more that Mesmero is indeed controlling her. We also realize that there is bigger threat pulling the strings; ‘umm I wonder who that can be,’ he asks sarcastically.

The action shifts back to the mansion where Kitty and the rest of the team are getting the X-Jet ready to retrieve Wolverine and the kidnapped mayor. She gets stopped by a group of students who insist on going on the mission to increase the X-Men’s odds. After a short discussion, Kitty picks Armor and Rockslide to join the Gold team; from prior memory, I thought Armor had already graduated to full fledged X-Man but apparently she is still considered B-Team thanks to a continuity slip up by Guggenheim. Rockslide and Kitty have a discussion about why he and Armor were picked, which makes sense to me but apparently went over his head. I mean they represent brute strength and defensive capabilities. Kitty ends the irksome conversation with a dire warning about how this new Brotherhood is not to be trifled with. 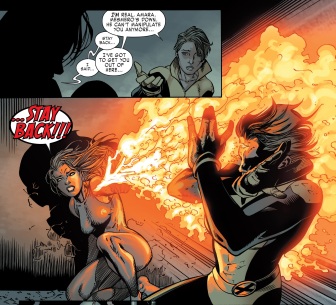 They arrive at an abandoned Worthington Industries factory (easter egg) and once in, Kitty has Rachel reinforce their psi shields. They run into the Brood looking member of the Brotherhood which kicks off the fighting. Storm and Rockslide break off and find the mayor but also a mind controlled Logan; never a good thing to tussle with him even if you are a stone monstrosity. Kurt comes in and teleports the mayor out of harms way, while the other two distract Logan. Rachel goes out to look for Mesmero and finds him before the action moves back to Colossus where he knocks out the Brood guy. Logan gets fried by Storm’s lightning before Rachel realizes the place is rigged with explosives about to blow. Kitty orders Kurt and the X-Jet to begin extraction but she remains behind to find Amara. Amara is in really bad shape mentally and attacks Kitty but Kitty’s determination to save her overcomes the opposition.

Back aboard the X-jet, they have about 30 seconds to get Kitty and Amara but Kitty realizes there is no time left and tells Kurt to leave them behind. Colossus watches on in horror as the facility explodes but Kitty’s phasing abilities save herself and Amara. We return to Central Park where SHIELD is picking up the members of the brotherhood, except for the new Brood guy who Kitty plans to interrogate. The X-Men debrief in the mansion where Rachel lets them know that she found out who is actually pulling the strings for Mesmero.

Shockingly, the person responsible is our new favorite TV personality Lydia Nance. They confront her at her house but lack the proof to take her down. Lydia warns them no one will believe a mutant over a human. Kitty threatens Ms. Nance through Rachel’s telekinesis and warns her that mistakes are inevitable and when she does eventually screw up, they will take her down hard. 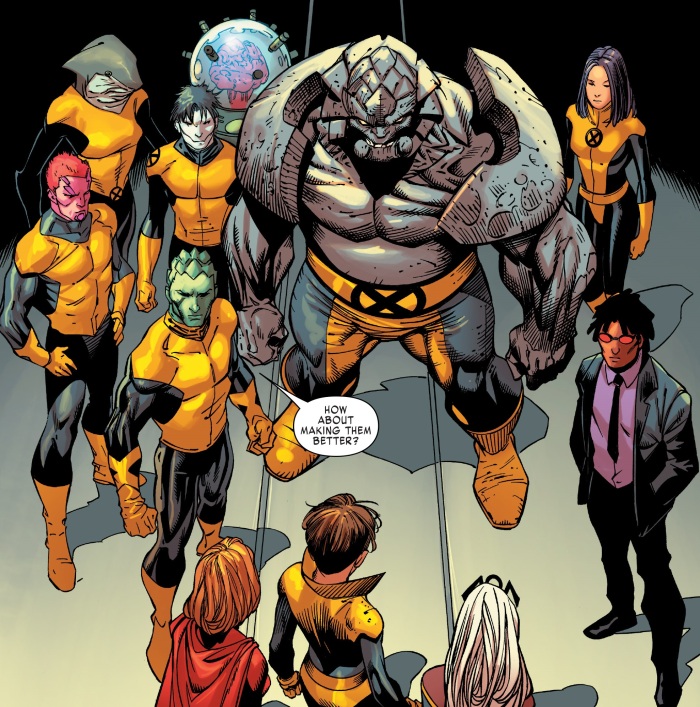 Conclusion: This is the end of the first arc by Guggenheim and it really was a trip down memory lane, as the tonal shift after IVX was to go back to the old well with a classic team and make the stories more old fashioned. It serves as a great jumping on point for newer fans and older fans who had given up. The art is always amazing by Syaf and I am certainly intrigued as to where the next arc will go from here and what Miss Nance may have in store for our merry mutants.