In my review of Hawkeye‘s first story arc, I mentioned it is important to fill an establish character’s supporting cast with not only new characters, but notable character from their past. Other writers may have gone to the old haunting grounds of team mates or characters with shared monikers but Kelly Thompson instead chose to focus on Jessica Jones, a character deeply rooted in Young Avengers mythos (she was in fact involved with the team before Kate Bishop was.)  So how does Kate’s team up with her mentor go? Check it out below.

If you’re about to say bitches be crazy, I’d advise against it. Know your audience, Brad: I would like to expand on what I have been saying with supporting casts, because I think about this all the time. My favourite run of Nightwing is Peter Tomasi’s run towards the end of the original DC continuity. It was a celebration of all the connections Dick had made throughout the DC universe because he is a bridge that ties different parts of the universe together, like: the young and the old, the Titans and the Justice League, the trained and the super-powered. This was something his New 52 run sorely lacked. But that kind of story can veer into a dangerous territory. It can come off as just a glorified celebration of who the character has been, not who they are becoming. And often a new supporting cast is essential to that character development. On the other side of things is something like the most recently concluded Venom series, Venom: SpaceKnight. In that, Flash Thompson was isolated from everyone he knew and the new cast never had a chance to develop into something special on its own because of the turbulent market that exists today. Original characters need to develop, while pre-existing ones can just exist and have fun since someone else has already done the work of establishing who they are and what they mean to your titular character. For example, Dan Slott does an excellent job of balancing Peter Parker’s cast with a mix of old and new in Amazing Spider-Man.

And Kelly Thompson does the same, which I think is the greatest strength of the series so far. She actually does it better than Slott does, in my opinion, because when she uses characters from Kate’s past she uses them in a way that helps advance Kate’s character forward. I mentioned in the opener why Jessica Jones is a great choice and someone who deserves her own storyline in Kate’s book, but within this story we get to see how Kate might not only be the best Hawkeye, but the better detective. Jessica’s intimate conversations with Kate reveal that she sees a lot of herself in Kate, but Kate seems to be just as put together as Jessica Jones is but much earlier in life. Jessica is little more than an enabler for Kate in this story, stepping into the driver’s seat at times to show Kate the easier path, but largely in the same seat as Kate herself.

And it is always a great sign when an original character shows up (or a group of them) and it makes me smile; Kate’s Scooby Gang are not fully developed yet, but they hit their one notes really well. There was one glaring omission to Kate’s cast that gets rectified by the story’s end; Lucky, the Pizza Dog. I was always more of a Clint/Lucky guy, but Clint has his hands full leading a rebellion, so I am glad Lucky is with Kate.

It’s time for us to grow up, Dhalia. I think part of that is learning to ask for help: 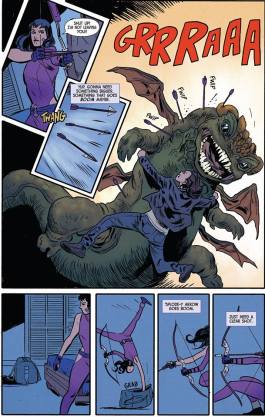 Overall, the story is fairly simplistic (I am surprised neither of our two detectives figured out the twist beforehand) but the work from the artistic team is anything but. For this story, Jordie Bellaire and Joe Sabino are joined by guest artist, Michael Walsh (who previously drew Clint Barton’s adventures in Secret Avengers) and guest letterer, Travis Lanham. Walsh has long been an artist I admire and is the perfect guest artist for Hawkeye, as his art is reminiscent of the series’ main artist, Leonardo Romero. I have used the term simplistic to describe Romero’s art, but that does these artists a disservice. They have a cleaner less detail orientated style, but that means that the scenes are always bustling with action; be sure to watch Kate’s background actions in the Jessica talking head scenes. If I had a complaint, it would be that Leonardo’s arrows are unremarkable in a subtle quaint way while Walsh’s arrow are unremarkable despite trying not to be. However, when Walsh isolates them in their own panel they come to life with a sense of movement that his splash pages lack. Walsh fills this story with tons of fantastic action poses for Kate and in an unusual turn of events, I find the art gets stronger in the second half. Kelly Thompson really likes her reaction shots and Walsh knows the right touches to put into a face to sell the emotion. My favourite design so far in the series comes from Walsh’s Inhuman dragon. It has an almost insect like quality which makes sense since she emerges from the shell of a human body.

The artistic hallmarks of the Hawkeye series begin to emerge as well. In addition to a plethora of reaction shots, we also see the return of the eighteen panel grid sequence and Kate’s Hawk-Vision. The Hawk-Vision begins to bleed together with Kate’s inner dialogue, which is best seen in a party where Kate is identifying people as “the guy from that movie” or “whatsherface from the commercial”. One feature I really like with the Hawk-Vision is that something Kate notices in the background in the beginning of a story will often come back as something important later on; it is a neat feature for a detective book that feels intrinsic to the titular character.

But this is the job. Saving Brad is the job. *sigh* Jobs suck, you guys: Our series mainstays shine as well. Jordie Bellaire continues to use a muted palette for the most part, but she does so in interesting ways. Kate’s memories are tainted in a faint purple, which is something I absolutely adore. It is the little things that bring this world to life, like how the light is filtered through the blinders on a window. Or how Jessica watches Brad in the reflection provided by Kate’s aviators. This storyline features the best use of shadows yet and I think some of the standout sequences involve shadowy outlines of characters against a white backdrop. Bellaire’s most dramatic colors come out as day turns to night. Sunset Boulevard fittingly has a beautiful sky but I feel Bellaire works best with night skies. A stand out moment amongst the sound effects is the Kr-Smash made when Jessica Jones falls out a window. And lastly, I would be remiss if I did not note the excellent new Hawkeye Investigations sign, designed by recap page artist, Manny Mederos.

And before we do our conclusion, I thought I would share with you all of Jessica Jones’ (but really Kate Bishop’s) rules: 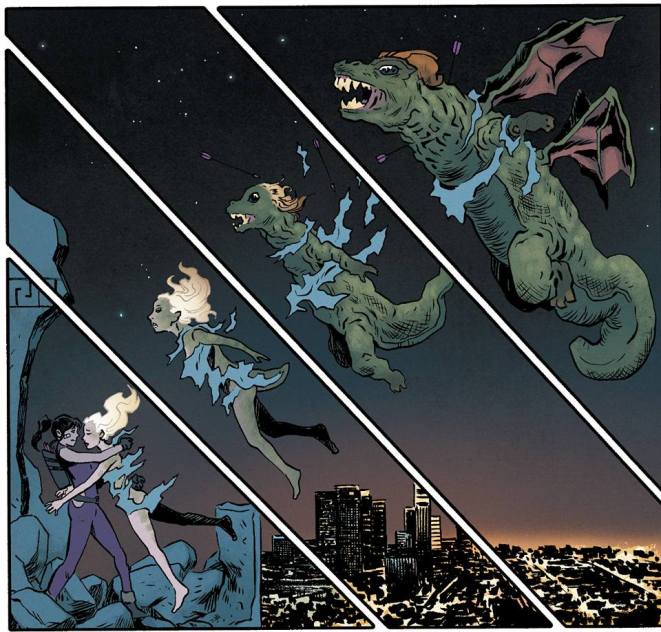 Conclusion: While I feel the arc started off a little slow, it got stronger as the story continued. It serves as a fun examination of the similarities and differences between Kate Bishop and Jessica Jones, which made them fun to bounce off one another. We leave Kate in a slightly (but not too) mature place and with the promise of Lucky and clones in the future, I can not wait to see what comes next.