The current threat to Midtown ended after the #FantasyComicLeague agents successfully fended off Deadpool’s ex-wife’s army of demons! The Merc with a Mouth, despite being served with divorce papers, was the only hero to hit for the cycle in the month of April, while Steve Rogers, Peter Parker, Peter Quill and Kamala Khan were a category short of performing the same feat. Overall, the #Midtown division dipped in the number of civilians saved (7) compared to the previous month, but defeated a lot more antagonists (25). The heroes experienced 10 character defining moments and earned 317 points! Agent @swampy19 (102 pts) led the charge for Midtown after he miraculously managed to draft Spider-Man to team with Deadpool, although swampy just missed out on beating the monthly #FantasyComicLeague record. Agent @Lennie_Roxx (70 pts) had another successful month with her somewhat recurring characters of Hulk and Thor. Agent @KingofTysons needed at least a third or fourth place finish to secure an overall win, and he managed to earn that with a 60 point finish. Agent @robertcyoung (44 pts) followed up his best month by reacquiring Vision but the recently reliable Medusa fell a bit short for him. Agent @JohnnyTimpulse (41 pts) kept his team of favorites absolutely the same from the previous month and finished in the same spot as before.

Congratulations again to our agents in their successful defense of the streets of Midtown! The overall score sees Brian taking the division win, with Swampy edging out Lannette for second place thanks to his cumulative point score from the four months. Despite finishing the season with two last place finishes, Johnny managed to snag fourth place thanks to his first and second place finishes, and Robert rebounded in the end, but couldn’t overcome the slow start! 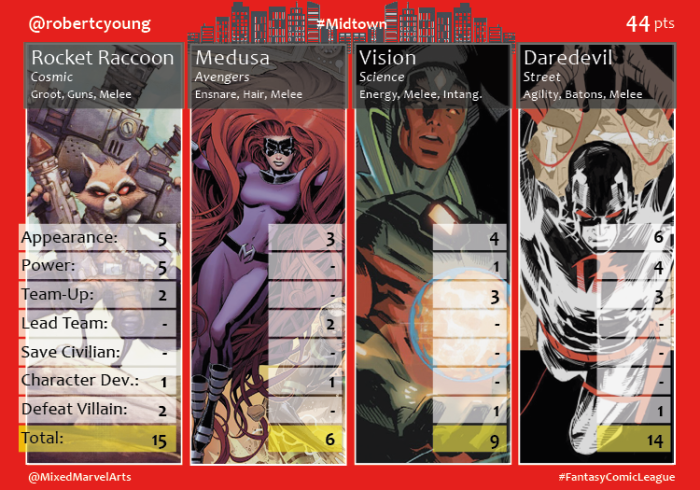 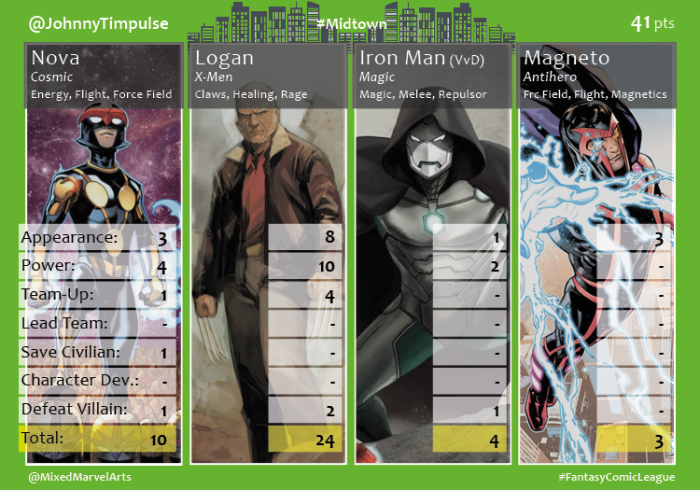