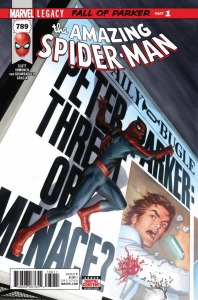 Peter Parker may be a threat or a menace after his global company imploded, but as Spider-Man, he’s the top hero of the Fantasy League for the second week in a row. Now that his cold streak is over, Spider-Man goes back-to-back with “Hero of the Week” titles with a score of 10 points. Wolverine, Daredevil and Deadpool tied for second place with eight points apiece; the latter two shared a comic when Deadpool popped up in The Defenders to aid Jessica Jones. Falcon returned his feathered persona and stands alone in fifth place with seven points. Kitty Pryde and Logan are the highest placing heroes tying for sixth place with five points, despite the X-Men crossover event not having as big of an effect on the league as anticipated. Father and son were half of a four-way tie rounding out the top ten heroes. Cable and Cyclops scored four points along with Jennifer Walters and Ms. Marvel. Nico Minoru, this month’s Runaways representative, showed up but only managed to score a character development point in addition to her appearance. Venom finally took a week off of appearing in a book now that his weekly event has ended.