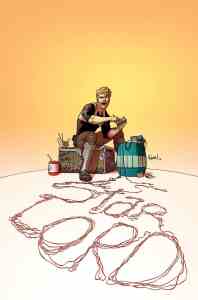 Peter Quill rocks out when the rest of the Guardians are out. Star-Lord stands alone in the latest Guardians of the Galaxy comic and at the top of the Fantasy Comic League with nine points. This earns him another “Hero of the Week” title in the beginning of July. The Champions are also running with a smaller cast in their own comic, featuring a story starring Hulk, Spider-Man and Viv. The former two tie for second place with seven points each, while Viv, making her Fantasy Comic League debut, only manages three points, but beats out other Fantasy veterans, such as Drax and Storm. Deadpool scores six points and holds down fourth place by himself thanks to a quick cameo in the All-New Wolverine. Daredevil shares fifth place with a raccoon, spider, wasp and wolverine, who all score five points each. Kitty Pryde and Thor each score four points and round out the top ranked heroes in the first week. Cable, another rookie Fantasy participant this month, fails to make an appearance in his first week of the League, tying him for last with characters such as Punisher and Odinson, who have both returned to competition after a brief hiatus.