Prior to the happenings surrounding Marvel’s Legacy, there was a shakeup within the #FantasyComicLeague Wakanda Division in which two members of the elite “S” Squad (Agent Sceritz and Agent Seren) were reassigned to #Knowhere. The Wakanda Roundtable was broken, creating a need for a changing of the guard if the new season of the Fantasy Comic League was to be successful in the land of Bashenga. Promoted to Division Leader, Agent Sistah geeked out in her role to ensure the “S” Squad would not be disbanded and would always have adequate representation. Calling upon the blessings of Bast, she worked with those remaining loyal to Wakanda, Agent Soton and Agent Super, in designing a series of stringent tests used to fill the unprecedented vacancies. Successful in their rites of passage in becoming official members of the “S” Squad were Agent Superior and Agent Sha.

Upon being called into battle and working together as a cohesive unit, Wakanda scored 226 points which consisted of saving 11 civilians, defeating 11 adversaries and navigating 16 life changing events. Agent Sistah (@S_Hero4Hire) took the lead early in the month and retained it despite a lackluster 4 point showing in the final week. Guess there’s something about being #TeamMsSmartyPants that helped her secure a 62 point first place win this month. Although the Runaways and his draft of Molly Hayes were both disappointing, this didn’t stop Agent Super (@supercurrymax) from an astonishing move from the back of the pack during the final week. Aided by Carol’s spotlight in two Generations events, he secured his second place finish with 47 points. Also coming in at 47 points, but finishing third, was Agent Soton (@sotonspidey) who was forced to spend his first month without having Peter Parker in his corner. Fortunately, he had the powerhouse Venom on his side. Though the new squad members came in fourth and fifth place, they were certainly not out of the running after both received boosts from Generations. Agent Superior (@SuperiorComics16) did so through his top performers Sam Wilson and Miles Morales to secure fourth place with 41 points. Contributing 29 points and coming in fifth place was Agent Sha (@La_Ney_sha) who saw a strong showing by Ironheart. Storm only brought in 3 points after a goddess invoking performance at the end of last season.

The Wakanda Caucus is now in session… 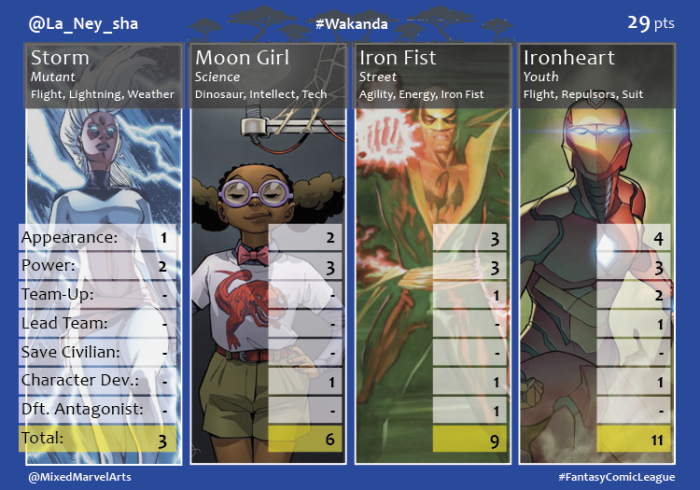