Whoa man, have I mentioned how much I love this series yet?

The Unstoppable Wasp #5-6: GIRLs in Action

Young Lady, Put Your Seat Belt On: This comic is seriously everything I wanted from a comic. I love legacy characters and I love young female leads, and I cannot praise Jeremy Whitley’s sense of pacing enough. He manages to drop a series recap in the fifth issue, and intercut the opening of issue six with Nadia’s montage from issue five, and yet it never feels like he is treading water or stalling the story. But I never realized how important fashion was to me in a comic. Every panel of every page grabs my attention because of how fantastic the wardrobes are in this series.

Elsa Charretier is a treasure and it is a shame she is leaving The Unstoppable Wasp next issue to finish up a Game of Thrones comic adaptation. There are so many little things I love in this series, but what seriously impressed me was how different Jarvis and Nadia looked when yelling at each other. Most artists often give characters the same faces/expressions when they react in the same ways, but there is a glimmer to Jarvis’ eyes that Nadia lacks (almost as if years of trying to keep the Avengers in line has given Jarvis a love for yelling.) The shapes of their mouthes are different too, which made me imagine they were yelling at each other in different pitches. 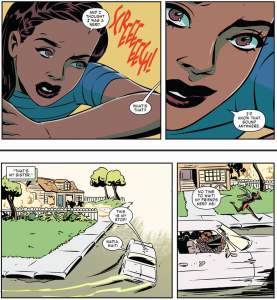 Charretier’s backgrounds are also full of character, even if at times they seem unfinished. Thankfully, she has Megan Wilson’s amazing colors to distract from the fact. The two work well together, giving even the backdrops in the series a bit of character. Letterer Joe Carmagna follows suit, infusing his sound effects with multiple colors that make them stand out amongst the usual onomatopoeia fare.  The series’ comedic timing is stronger than ever with these issues; a highlight is Ying’s continued awkward joking, which is often punctuated with shading or color.  Or when Shayla disposes of the bomb from Ying’s head and accidentally assaults the shock troopers waiting to assault them. Another strength of the artistic team is how they portray Alexis’ crazy driving through a mixture of exaggerated colors and speed lines. And there is a seriously impressive splash page in the fifth issue that is a glory to behold as it depicts multiple versions of an already large cast interacting together in a small room as time progresses. Seriously, there is very little this artistic team can not do together.

I Hope You’re Happy I’m Wearing My Seat Belt Next To The Human Time Bomb: Speaking of the group, I have to return to praising Whitley. The exchanges between characters is great. It is full of emotion and humour, but most importantly, individual character voices. Taina Miranda, nicknamed Tai, is our blunt robotics expert. Alexis Miranda, her cocky older sister is our driver. Lashayla Smith, nicknamed Shay, is the physics expert with pop culture references rolling off the tongue. Priya Aggarwal is one part biologist, one part fashion designer and honestly, the whiniest of the bunch. And then there is Ying, Nadia’s oldest friend and the chemistry expert who uses far too much awkward humour. They are all endearing in their own way and they work great together. Jarvis and Matt Murdock are used expertly as foils to the girls and some of the best lines come from the two of them; text book examples of how to use guest stars in a comic. The solution to this series’ first big arc being rooted in the legacy of Hank Pym is a final great touch in a series full of them. 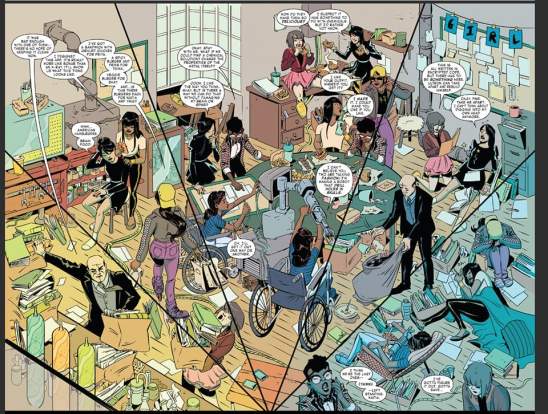 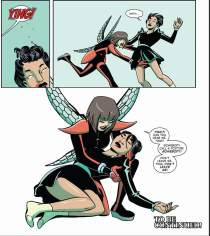 Conclusion: I am really blown away with The Unstoppable Wasp. Jeremy Whitley, Elsa Charretier, Megan Wilson, and Joe Carmagna treat every issue like it is someone’s first, even five issues into a six issue arc. Despite this, Whitley keeps the story going and has an excellent sense of pacing, and uses cliffhangers well. I really am going to miss Charretier’s amazing sense of style on the series, but I hope the book makes it long enough to see her return. The next issue sees Veronica Fish take her place, who has proven to have a strong sense of style over at Archie Comics. Fish has a tendency of replacing artists on series just before they are cancelled (Silk, Spider-Woman) which is unfortunate, because she herself is a treasure. Here’s hoping for the best.