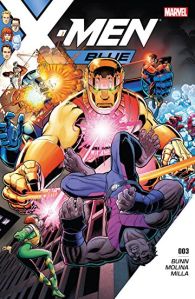 Recap and Thoughts: As of last issue, the team got to Barcelona and saw that the Sentinels were not trying to fight them but they still don’t trust them. The original five initiate a fight, but soon realize that none of their attacks are working and a young Spanish girl named Belen, asks them to stop. She tells them that the Sentinels were helping her when her newly emerged powers went off the rails. The Sentinels tell them that they are not to be harmed and ask them to come with them as they want to show that they are working towards the same goal; helping mutantkind.

The original five are hesitant so the Sentinels take them by force. En route, Belen and Jean have a chat where Belen explains how her powers developed; what started as a simple headache quickly escalated. Somehow the Sentinels now have power dampening abilities; wow, why did the X-writers never think of that before? Jean gives Belen a crash course on Sentinels and how utterly terrifying it was for her to face them. They get brought to a mysterious place and the Sentinels turn their power dampeners off before revealing their mastermind. And Holy Operation: Zero Tolerance, it is none other than Bastion. 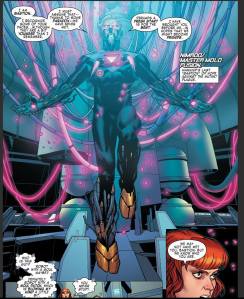 Bastion reveals his knowledge of the time paradoxical team and the he knows he hasn’t met these younger versions before. He lets them know what happened during the time where he went after Hope and how he sneaked into the future to avoid death. While there, he saw the Terrigen Mists had really put a damper on the mutant race, so he came back and reprogrammed some Sentinels to help mutants. He wants the the young X-Men to help in this goal but they are not buying into it, although for some reason Belen is. Hank realizes that there has to be a reason for Bastion trying to help mutants and when Jean asks him we get the answer Hank was expecting. Bastion wants to help the mutants flourish once more in order to eliminate them properly; whatever that means. This prompts the team into action and as quickly as the battle starts, Bastion teleports them all out of harms way; harm they created with reckless battle tactics.

After the fight, Belen feels lost, like she had some sort of purpose, but Jean offers to take her to the X-Mansion/School. The team realizes that they are stranded, but oh wait, the Blackbird arrives to pick them up; why was it tracking them? It is nice to have the source of relief in this situation have slightly sinister undertones. Jean and Scott have a heart to heart conversation about their recent actions and Scott lets her know he trusts her and with some help things will turn out for the best.

Conclusion: As Cullen Bunn ends his first arc of Blue, we start getting a clearer picture of the team’s mission. We have had some highs and lows regarding the performance of the team and the continuous questioning of their methods may have led to those lows. We know Magneto has some ulterior motives, but I truly believe he has the team’s best interest at heart. To me it seems it is time to bring some new blood into the team, to get a new perspective. The artwork was great by Molina but at the end of the issue it switches to Height, who is like a poor man’s Molina; a good fit, but the quality drop is noticeable. I am looking forward to the next few issues as we may see the introduction of Jimmy Hudson, a character from the dead Ultimate Universe.