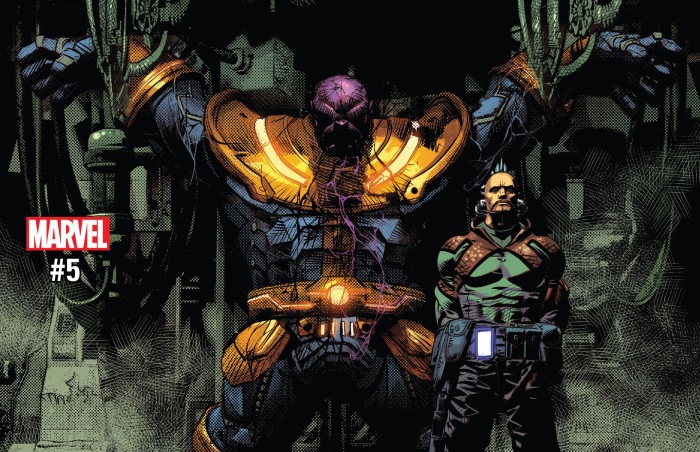 Thanos #5 is finally here, and when it comes to books of cosmic level excellence, it does not disappoint. I was already excited to see that the greatest villain ever created was getting his own title, but I had no idea that ride we’d be in for. While he’s the ironically, beyond evil villain of this tale, shifting the focus to him as our protagonist has been an interesting ride. If anyone else feels both dirty and strangely empowered for rooting for the Mad Titan… don’t worry, I’m pretty sure the book is written to make you feel that way.

In any case, in Thanos #5, the Mad Titan was ambushed, beaten and captured by the Imperial Guard. Remember though, he’s weak and dying already from an unknown source, so when Gladiator put the final whammy on him, it was no wonder that he stayed down. After all, he’s one of few people that could go toe to toe with Thanos at full power for a decent stretch, if he needed to. What I like about issues like this (when a big bad like Thanos is captured) is that they always put them away in some top of the line, impossible to break out of, maximum security facility, that you know he’s going to eventually break out of. It simply makes it that much more epic when he does.

Meanwhile, his son Thane and his band of would-be assassins are breaking their own captive out of Terrax’s prison. This was fun, due mainly to Starfox using his uncanny ability to “talk paint of off walls” (as Slatterus puts it). It was hilarious to see Terrax just at the brink of tearing off Starfox’s head, for refusing to provide a valid explanation for why he was there. Really, having Starfox at all is a treat. But the team finds what it’s looking for, unbeknownst to all of them, Thane lead them directly to the Phoenix Force.

The cover art is epic. We get a sense of Thanos’ weakness from his illness while still bristling at his raw presence at the same time. Mike Deodato is really able to capture that overwhelming sense of power in the Mad Titan. The color scheme on the cover, and throughout the book is perfect. The dark shadows wherever they can be added, is there. It creates the feel of a shroud of evil and deception embracing the entire story. It puts your mind in another state while reading, and that’s what comic book art should do. Superb work.

This arc has been amazing so far, and every issue has me waiting in impatient anticipation for the next. I need to know what happens. The main plot is compelling and the subplot feels like it can grow into something more compelling all on its own. Jeff Lemire knows how to handle Thanos, and I am happy to see him on this book.