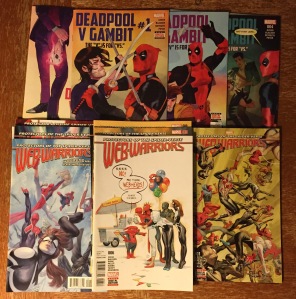 A wise man once said, “we are all just spiders or scoundrels.” That’s a lie, there was no wise man. It’s really just the January theme for the Mixed Marvel Comics Giveaway. In a year shaping up to be decisive and antagonistic, let’s share some comics which highlight working with those that annoy you. The complete run of Mike Costa’s Web-Warriors series makes up the bulk of the comics in January’s Giveaway. The motley crew of Spider-characters, and self-proclaimed protectors of the Spider-Verse, must work together to defeat an army of Electros from destroying the Web of Life. If you prefer your Spider-Hero to have a second x-chromosome, or hail from the United Kingdom, India or America’s Great Depression, this book has something for you. And of course it features the cynical swine, Spider-Ham.

In addition to Web-Warriors, Mixed Marvel Arts is throwing in a team-up between two of Marvel’s most salacious, scalawags. Deadpool v Gambit by Ben Acker and Ben Blacker features the old frenemies having to retrace a con from their shady pasts. This brings them into conflict with cobras and alligators.

These comics can be yours for the taking! In order to express interest in the comics, please follow the Mixed Marvel Arts on their Facebook and Twitter page and ‘Like’ and ‘Share’ this ‘Mixed Marvel Comics Giveaway – January 2017’ post. The more emphatic and supportive you are on social media, the better your chances are of winning this haul of comics! Only likes, shares, retweets and comments on the Comics Giveaway post count as entries. The Comics Giveaway is only eligible for fans in the United States of America and Canada. Mixed Marvel Arts will cover the shipping costs of the comics (some extra shipping fees may apply outside of the US). Digital copies of these comics are not included, all comics should be considered to be in good condition.

The current Giveaway will run from Monday, January 16, 2017 to Tuesday, January 31, 2017. By following, liking and sharing this post, you are allowing the Mixed Marvel Arts to announce and share your social media name/handle when awarding the comics on the December #FantasyComicLeague episode of the podcast. The Mixed Marvel Arts is in no way associated or endorsed by Marvel Entertainment or The Walt Disney Company.