Most of the country would consider the New England Patriots the winners of Super Bowl XLIX, but Chris Pratt and Chris Evans came out on top in many other people’s books. Pratt and Evans engaged in a Twitter Bowl bet prior to the NFL’s championship game; the ‘loser’ would visit a hospital of the winner’s choice while dressed as their heroic alter egos. And since Pratt’s Seattle Seahawks lost the Big Game, the actor made good on his promise and visited Christopher’s Haven in Boston as Star-Lord. Evans was also on hand and has promised to return the favor, planning a visit to Seattle Children’s Hospital as Captain America. 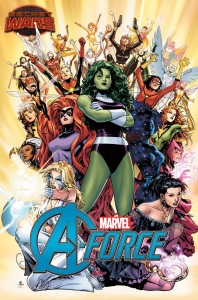 A-Force. Marvel continues to invest in their diverse stable of creators and characters. Rising star writers, G. Willow Wilson and Marguerite Bennett, are assembling the first-ever, all-female Avengers squad. The series focuses on She-Hulk, Medusa, Dazzler, Nico Minoru and a new character named Singularity. The new hero is described as a pocket universe that gained sentience during the incursions which are the crux of the Secret Wars event. Singularity chooses to embody a female and, according to Willow, will explore what it means to be a woman. A-Force forms in Arcadia, a “feminist paradise” found in Battleworld, and battles with a classic Marvel villain. comicbook.com

Brian Michael Bendis. After spending more than two years tending the X-Men franchise, Brian Michael Bendis is relinquishing writing duties on Marvel’s merry mutants. Bendis kicked off his X-Men tenure by pulling the original five X-Men forward in time and creating the All New X-Men. Cyclops and his Uncanny X-Men spent the time as fugitives and the Guardians of the Galaxy (a series also written by Bendis) made several visits. Marvel quickly followed up the news by announcing a new exclusive deal that keeps one of their main architects in-house. In addition to his work as a writer, Bendis has worn a variety of hats for Marvel in their television, games and movie divisions. comicbookresources.com

Marvel Heroes. Gazillion released a trailer for the Winter Soldier, the latest character added to their dungeon crawling computer game. Bucky’s move set features a heavy dose of guns and explosives, and where he hitches a ride on a helicopter so you can unleash an aerial assault on the minions below. Bucky is the latest playable hero introduced to the game, in addition to new costumes for Venom, Hulk, X-23 and Spider-Man. An advance team-up pack which includes Carnage, Quicksilver and Spider-Gwen, among others, is also available through the game’s website. marvelheroes.com

Daredevil. Netflix revealed the first trailer for their hotly anticipated Marvel streaming series. The peak gives the viewer a look at what is supposedly the earlier part of the series, showing Matt Murdock in his beginning costume and seeking forgiveness for what he’s about to do to make his city a better place. Foggy Nelson, Karen Page and Stick are also present in the preview. The trailer mainly focuses on showing Daredevil’s heightened sense of sound and his combat skills, so there is still plenty to show before the April 10 release date.

AKA Jessica Jones. Production for Netflix’s follow-up series has begun in the Bronx neighborhood of New York City, and the first set photos have appeared online. They offer a look at star Krysten Ritter as the title character. comicbookresources.com

Agents of S.H.I.E.L.D. ABC is going all-in with the Inhuman storyline when Agents of S.H.I.E.L.D. returns in March. New Inhuman cast member. The midseason return trailer focuses on Skye, revealed to be Daisy “Quake” Johnson, struggling with her new Inhuman powers. ABC also announced Luke Mitchell as a new cast member, playing a mysterious Inhuman that can help Skype understand and control her new abilities. comicbook.com