Marvel is delivering the goods and Fox delivered a trailer. The House of Ideas is teaming up with Funko to release a Marvel-specific subscription box service, effectively challenging the reigning distributor of nerd merchandise. Marvel Collector Corps launches in April to coincide with the release of Avengers: Age of Ultron. The first box includes an exclusive Iron Man Hulkbuster Pop! vinyl collectible and Marvel has the rest of the details on their site.

Fantastic Four. Collider landed an exclusive interview with Fantastic Four director Josh Trank and producer/screenwriter Simon Kinberg. The article revealed the first picture of Michael B. Jordan in the Human Torch containment suit and Trank and Kinberg answering questions about the comics, its sci-fi influences and the length of the film. collider.com

Avengers: Age of Ultron. Empire Magazine released its latest issue and its full of Avengers: Age of Ultron previews. The magazine offered two alternate covers, one featuring the heroes and the other showcasing a close-up of the titular villain’s metallic mug. Inside the issue are a slew of new pictures to promote the upcoming film. superherohype.com

Captain America: Civil War. Newsarama points to a casting call website that indicates Daniel Bruhl’s unconfirmed role is that of notorious villain, Baron Zemo. The site also provides a plot update which states the Superhuman Registration Act is the last wedge that divides the Avengers. newsarama.com  .

X-Men: Apocalypse. Kinberg spoke with Entertainment Weekly about the other Fox-owned Marvel property, X-Men.He confirmed that Rose Byrne will reprise her role of Moira MacTaggert, a character she portrayed in the X-Men First Class film. ew.com

Lego Avengers. After the success of the Lego Marvel Super Heroes play sets and video game, LEGO Group and Marvel are building off of their connections. The companies announced a new play set inspired by the Helicarrier in the first Avengers film, as well as a new game centered on Marvel’s mightiest heroes. The new video game, due out this fall, will cover the events of both Avengers movies. newsarama.com 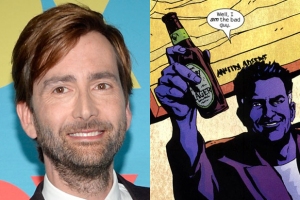 A.K.A. Jessica Jones. The latest bit of casting news for Netflix’s next Marvel series gave fans a reason to cheer, but also to fear, for Jessica Jones. Fan-favorite actor, and former Doctor Who, David Tennant has joined the cast as the villain Killgrave, also known as the Purple Man. The villain is known for tormenting Jessica Jones with his ability to control others and it’s said his appearance will cause “shock waves” in the life of the hero-turned-private eye. thewrap.com

Marvel did not want it to look too grim for Jones, however, and they soon revealed the casting for her best friend, Trish Walker. Walker, also known as Hellcat, is a former model and child star. She will help Jessica embark on the most dangerous case of her career. marvel.com

X-Men. Fox Entertainment has confirmed they are looking into ways of developing a show set in the X-Men universe. Nothing official beyond the wish to make it happen. tvinsider.com