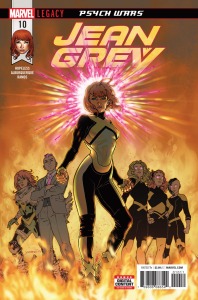 The top of the Fantasy Comic League featured quite the unusual family reunion in the second week of December. Two heroes scored 11 points to tie for the “Hero of the Week.” One hero was the time-displaced son of the clone of the older version of the time-displaced second hero. Cable and Jean Grey for those that could not keep up with that twisted family tree! Another convoluted relationship placed next in the list. The young female clone of Wolverine scored eight points for third place, while the older alternate version of Wolverine scored seven points for fourth. Falcon came in fifth with six points but is now a wanted man. Quentin Quire scored his first points in the League when he defied the Phoenix Force to side with young Jean. He scored five points and tied Daredevil for sixth place. The top ten was rounded out by some regularly appearing heroes, Cyclops, Deadpool and Peter Parker, but Loki mischievously snuck his way into a four-way tie with those heroes. Six other heroes scored points in the week. Iceman had a minor role to play in the X-Men: Blue, Kitty phased into Squirrel Girl, the Venom symbiote failed to do much in the second part of his Spider-Man event, and Moon Girl and Ms. Marvel had just an appearance in their Secret Warriors title. Molly Hayes added to the theme of family fun when she introduced a new family to her friends.