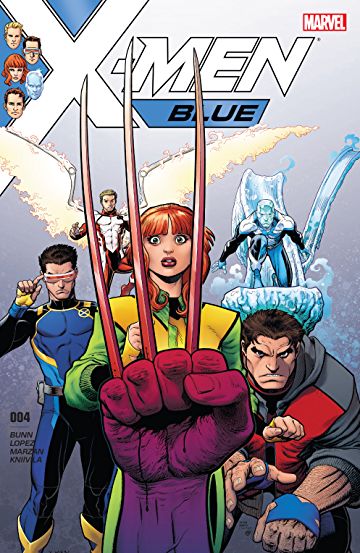 Recap and Thoughts: The team is an a mission to pick up a ‘New Mutant’ (pun intended) but Cerebro really can not get a good read on them, giving the team little more than a location. They wind up in Arrow Ridge, Colorado, in a very snowy woods (is snow in the woods during the summer common in Colorado?) Once the Blackbird lands, the original five go off in search of this mutant only to find a body in the snow. Once they try to inspect it, they are interrupted by Sheriff Kira Lee; she was the protagonist of the backup story in X-Men: Blue #1.

She wants them to leave the body alone, even though she might be out of her jurisdiction. She recognizes the team from television, but her demeanour seems to be less hostile towards mutants, more defensive of her involvement. She proceeds to tell them about the mutant they are looking for. He has claws which leads the team to assume it is Old Man Logan but Sheriff Lee tells them that he is a young man. One who saved her life while fighting a giant creature that Hank deduces as the X-Men villain, Wendigo. She figured she would help him in his fight, tracking him since the events of the first issue; rather unsuccessfully.

Jean tries to see if she can get permission to read Kira’s mind, to get a clearer picture of this mutant but she refuses. Thankfully, the plot has staggered long enough and they are confronted by this mutant; Jimmy Hudson from Earth 1610. A fight ensues and the team winds up knocking him out before realizing they have met him before in their inter-dimensional adventure to the Ultimate Universe. Well, everyone except for Cyke, who was gallivanting in space with his father’s crew at the time. Jimmy recovers but does not recognize them and is ready to attack them. Sheriff Lee manages to shoot him, which is a little more than a distraction which allows Iceman to form a gigantic ice body and knock him out again.

When Jimmy awakens, his feral rage has subsided a bit and he recognizes the team. He agrees to talk to them in a neutral place, which turns out to be some backwater bar. Jimmy tells them that he doesn’t remember much about his prior life (really leaning into the young Wolverine vibes here) and has been wondering around trying to discover himself. They let him know about the adventure they had prior where they confronted Dr. Doom but Jimmy has no memory of this. They offer to help him but then boom, suddenly a  team shows up compromised of other Ultimate Unvierse remnants: Ultimate Armor, Ultimate Mach II, Ultimate Quicksilver and Ultimate Guardian, collectively know as the New Marauders. Despite a rather poor choice of name, that is one helluva a cliffhanger. 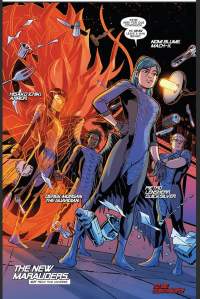 Conclusion: This issue wastes no time barrelling through the Jimmy Hudson story, which is a pro in my book. I am very excited to see what this New Marauders team in action and how their survival of the Ultimate Universe’s demise could influence not just this series, but the entire Marvel line. Are there other survivors? I Love Love LOVE the Art Adams cover but I am not feeling the art by Julian Lopez. It is hard to follow Jorge Molina’s steps, I will admit, but it does not even come off as a poor man’s Molina but worse. All in all, a good issue. I really want to see where this Jimmy Hudson rabbithole leads to.