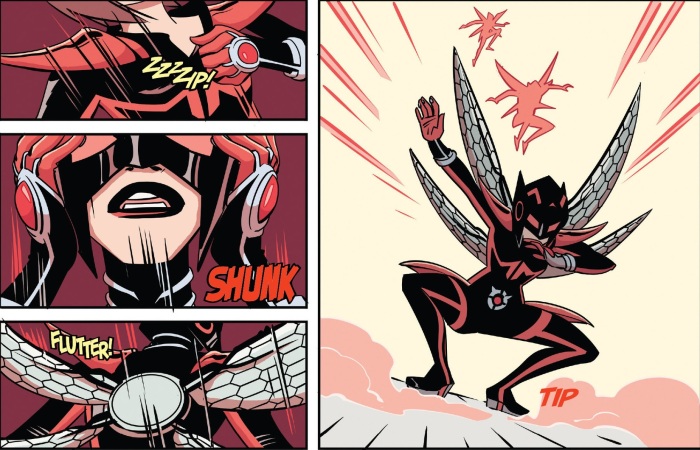 Hey guys, Shaun here. Today we are going to look at one of my favorite Marvel books, Unstoppable Wasp. It is managing to carve out a niche for itself inside a more diverse Marvel and I hope you guys love it as much as I do.

Somewhere Something Incredible Is Waiting To Be Known: Nadia Pym is an addition to the Marvel Universe that no-one was really clamoring for. Janet Van Dyne is still an active member of the superhero community, who never had her own comic, and although Nadia stands for Hope, I imagine most Hope Pym fans were expecting the old character to return. In spite of all this, Nadia Pym is a fantastic addition to the universe, one who skews towards the feminist and science communities. Nadia has all the brilliance of her father and a lot of his ego too. But she has a likability that leaps off the page. Just the way Nadia transitions from scene to scene is enjoyable and she brings out the best in people. She is a figure who is easily inspired but inspires others in turn. She has a believable naivety that comes from a backstory that utilizes the well established threat of the Red Room. Her captions often take the form of scientific exposition, known as Nadia’s Science Facts, which is a nice addition to the traditional thought boxes. This often allows the story to lay out a scientific problem for Nadia to engineer her way through. Is it perfect science? Maybe not, but it works within the logic of the story. Nadia’s facts are often relevant to more than just the fight of the issue; in the fourth issue Nadia reflects on aspects of Krav Maga that are later used against her.

Jeremy Whitley has to be commended on how great this series flows. In just four issues, we are introduced to six new characters, several guest stars appear with notable panel presence, Nadia teams up with three different superheroes, there are four fight scenes, and an extremely effective subplot involving Nadia’s Red Roomie. Whitley keeps the story fun with inventions like static electrically charged phone tasers and a real love of comic book history; I am curious if elements of Chris Samnee & Mark Waid’s Black Widow will play a role in the coming issues. 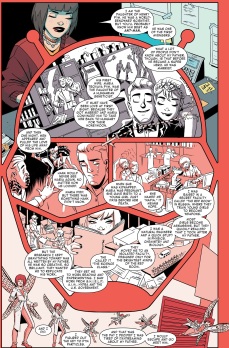 The First Woman On The List Placed At 27: Nadia is a stellar lead, but her title is full of great characters. There is a reverence for the older female superheroes like Janet, as well as an active pursuit of newer heroes. There is a love for Bobbi Morse that the character does not get often enough, and needed after the cancellation of Cassandra Cain and Kate Niemczyk’s Mockingbird. Jarvis, a relic in the J.A.R.V.I.S. era we live in, is probably the MVP of the supporting cast. Janet’s role is minimal but powerful and I can not help but wonder if Nadia might take her last name to solve her identity issues.

The new cast stand out as well, thanks to diverse situations and attitudes towards Nadia and G.I.R.L. (Genius In action Research Labs). The weakest of the new additions are probably the Miranda sisters, who have to split a short scene together. My favorite of the new cast is Ying, Nadia’s science partner from the Red Room. As we learn more about Nadia’s past in the Red Room, Ying benefits from a shared backstory. There is a lot of genuine affection on Nadia’s end that endears the reader to Ying as well. 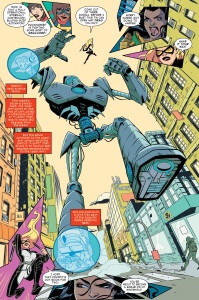 I’m Going To Make Them Rethink That Whole List: Unstoppable Wasp is Elsa Charretier’s first ongoing Marvel gig and at times it shows. But she uses her pages well, creating panels with creative and unconventional framing. During her fights she uses a style similar to Gerardo Sandoval’s paneling, which cuts to specific details or characters over a background drop of the fight. Condensing figures is another aspect Charretier could improve on, but there is some notable improvements between the first fight with Ms. Marvel and Mockingbird, and Nadia’s later fight against Poundcakes and Letha. Ms. Marvel is an excellent choice for the first guest star, as it allows Charretier to use her loose anatomy in effective ways. There is a lot of personality to Charretier’s art, in the background and especially the wardrobes. While Charretier has work to go with all the emotions, she has no problems with joy and it leaps off the pages. An element that helps that is Megan Wilson’s colors. While there is an overabundance of simple monotone backdrops, the colors really help sell the mood of scenes both joyous and dour. Wilson also does a good job with shadows in the series. One thing the artistic team is unable to do is make Mockingbird’s mask work; that thing really needs to go.

There are also comedic aspects to Charretier’s work, usually done in the background of Whitley’s chatty scenes. Joe Caramagna does a good job of lettering the fights so that the dialogue is not overbearing. He also does a great job of making the letters part of the art through the use of various effects. 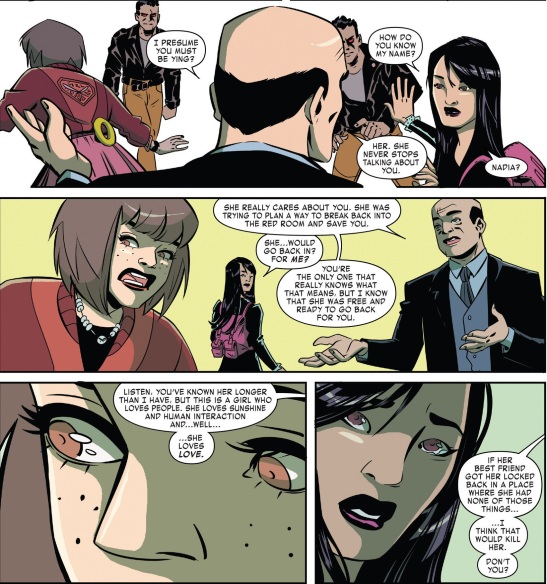 Conclusion: This is a really well done book with a great agenda. It’s a book fighting for representation in a male dominated industry; even the letter sections are working towards this goal. The under-representation of women in Marvel exists both inside and outside the universe; seriously, does a female letterer even exist? Marvel is currently putting out ten books targeting a young adult audience with female leads. Of four possible roles on the creative teams of these female led titles(writer, artist, colors/inks, and letters) only 12 out of 40 were filled by females during their latest issue. The statistic does not improve when you include adult heroes like the aforementioned Black Widow, or team books like Mark Waid and Humberto Ramos’ Champions. There is however several females working as editors on these titles and more. I applaud the work of everyone working on these titles, they make up most of what I read, but Marvel can do better than this. This book is amazing and I wish it was as unstoppable as its titular character. But I am here until the very end and I applaud the creative team on making a place for a character no-one asked for.

C.H.I.C.s: Since G.I.R.L and the List are important aspects of this story, I thought I would make a list of my own. These are some of the notable women in Marvel comics or CHICs (Chicks Hustling In Comics). If you are reading this and you enjoy the work these creators have done, pop by and let them know you do.