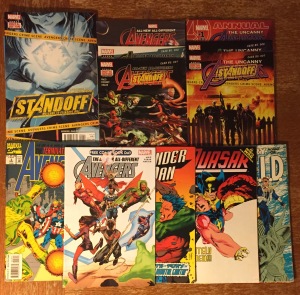 Don’t just stand there! Enter now for your chance to score Avengers: Standoff, the B-list Avengers event of 2016! The old (literally) Captain America Steve Rogers won’t stand for being elderly anymore. Eric Selvig, the scientist pal of Thor in the MCU, makes his debut in the comic pages. And who is that Helmut Zero guy dividing the heroes in Captain America: Civil War? All this and more in the Standoff main comic books, and the Uncanny Avengers and All-New, All-Different Avengers tie-in comics. In addition to the Standoff related comics, the Mixed Marvel Arts is throwing in some extra Marvel comics including the recent Avengers annuals, a Wonder Man comic (hey, Rogue has his abilities in Uncanny Avengers!) and a Quasar comic (hey, didn’t they introduce a new Quasar in the Standoff event?)

Update: As a bonus this month, and in honor of the late Carrie Fisher – Star Wars legend and pop culture icon – we will be adding Marvel’s Princess Leia 2015 miniseries to our December Giveaway to spread the love for Fisher’s historically influential character.

May the Force Be With Carrie and all her family and fans.

These comics can be yours for the taking! In order to express interest in the comics, please follow the Mixed Marvel Arts on their Facebook and Twitter page and ‘Like’ and ‘Share’ this ‘Mixed Marvel Comics Giveaway – December 2016’ post. The more emphatic and supportive you are on social media, the better your chances are of winning this haul of comics! Only likes, shares, retweets and comments on the Comics Giveaway post count as entries. The Comics Giveaway is only eligible for fans in the United States of America and Canada. Mixed Marvel Arts will cover the shipping costs of the comics (some extra shipping fees may apply outside of the US). Digital copies of these comics are not included, all comics should be considered to be in good condition.

The current Giveaway will run from Monday, December 19, 2016 to Saturday, December 31, 2016. By following, liking and sharing this post, you are allowing the Mixed Marvel Arts to announce and share your social media name/handle when awarding the comics on the December #FantasyComicLeague episode of the podcast. The Mixed Marvel Arts is in no way associated or endorsed by Marvel Entertainment or The Walt Disney Company.