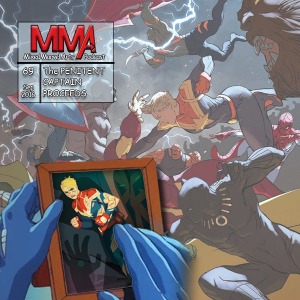 The Mixed Marvel Arts Podcast shows penance for the wrongs they have committed. In Brian’s case, it was for doubting Ghost Rider on Agents of S.H.I.E.L.D. Shaun was forced to suffer for his landslide victory in the Fantasy Comic League and over relying on Captain Marvel. Nevertheless, Shaun stands by the beleaguered Captain and defends her role in Civil War II. Carol Danvers isn’t the only Captain being judged by her peers, however, as both of the Captain Americas fight their own personal battles. As a reward for showing great remorse, Brian reveals the news that the MMA Podcast will host their first official interview in October when they welcome two of the writers behind X-Men: The Animated Series. The hosts also announce the winner of the second Mixed Marvel Comics Giveaway, @masonrad. Episode artwork: Wolverine from X-Men: The Animated Series;  Captain Marvel, vol 9 #9 by Kris Anka; Civil War II #5 by Marko Djurdjevic.

Thanks for listening, and please continue to follow us on Facebook and Twitter for all updates and news about future recordings! For more information, questions or general comments, be sure to reach out to the hosts on Twitter @mixedmarvelarts. Please also remember to like us on Facebook and subscribe to the podcast via iTunes. Don’t forget to leave some feedback!