New York Comic Con broke records this year, and Marvel made sure to put the emphasis back on “comics.” Jeremy Renner’s Hawkeye persona received the wax treatment and represented the bit of Marvel-related movie news. Hawkeye is the latest addition to Madame Tussaud’s Marvel Superheroes exhibit. And before we wade through the deluge of new comic book announcements, an older, serialized strip is getting collected into hardcover editions by IDW Publishing. Spider-Man’s popular comic strip, which debuted in 1977, has followed the wall-crawler and his supporting cast, but rarely lined up with the main comic book canon.

Secret Wars. If the promoting is to be believed, Marvel’s biggest comic event for 2015 will have a lasting ripple effect throughout the year and possibly longer. The new Secret Wars event, starting in May 2015, will serve as the capstone to Jonathan Hickman’s work on both the Avengers and New Avengers titles since he began writing them in 2012. The promo image, painted by art legend Alex Ross, depicts several Marvel heroes from varying universes including the main 616 universe, the Ultimate Universe, the MC2 universe and Neil Gaiman’s Marvel 1602, among others. Amid rumors of cancellations, fans have noted characters from both the X-Men and Fantastic Four are absent in the promotional artwork. newsarama.com

No More Mutants. Marvel unveiled another event with a familiar title and accompanying artwork displaying the twin children of Magento in front of the infamous phrase “No More Mutants.” Marvel reassured fans that this did not spell the end of the mutant race in their comics, as it nearly did when Scarlet Witch uttered the phrase during the House of M event in 2005. Instead, “No More Mutants” will be an Avengers story spinning out of the current AXIS event in which Magneto plays a prominent role. newsarama.com

The Black Vortex. Kitty Pryde is to be reunited with her cosmic-crush, Star-Lord, when the X-Men join forces with the Guardians of the Galaxy once again. The series focuses on a hunt for an object that can unlock anyone’s potential and will have two bookend issues written by Ed McGuinness. bleedingcool.com

Wolverines. Just because Wolverine is finally meeting his end in the comics, doesn’t mean his influence in the Marvel 616 will be ending. Charles Soule, the writer behind The Death of Wolverine, is joined by Ray Fawkes and Nick Bradshaw to launch a new weekly series titled Wolverines. The book will feature Wolverine-esque characters Sabretooth, X-23 and Daken along with others including Mystique. comicbook.com

Spider-Gwen. Marvel is striking while the iron is hot by announcing that the well-received Spider-Gwen is being giving her own title in February 2015. This is a good sign for her fans, as it leads one to believe she will be surviving the Spider-Verse event – a fate not guaranteed for several other Spidey-Characters. newsarama.com 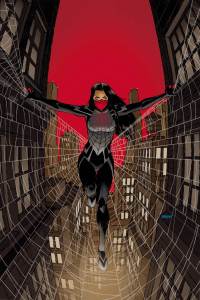 Silk. Another Spider-Lady is getting her very own ongoing. The latest Original Sin event revealed that Cindy Moon received a bite from the same spider that turned Peter Parker into Spider-Man, and now she’ll officially be introducing herself as Silk to the rest of the Marvel heroes. No word on how much Peter will show up, but they can’t keep their hands off each other in the current Amazing Spider-Man comics. Writer Robbie Thompson and artist Stacey Lee launch the book in February 2015. comicbook.com

Ant-Man. In an unsurprising move, Marvel announced a new Ant-Man ongoing comic to help build anticipation for the upcoming Paul Rudd-led film. Like the movie, the series will focus on Scott Lang and his status in the Marvel Universe. Writer Nick Spencer provided an exclusive interview in which he talks about his wish for Lang to become an A-List character. comicbook.com

Operation S.I.N. More synergy between the Marvel Cinematic Universe and the comics will be on display in January when Agent Peggy Carter gets her own television show and comic book. There’s no relation between the two beyond the main characters; both will feature Howard Stark as well. The comic will team the duo up with the Original Sin character Woodrow McCord, the man known as the “Man on the Wall” and Nick Fury’s predecessor in that role. McCord reveals Hydra’s extraterrestrial connections in the 1950s espionage story. Series writer Kathryn Immonen and illustrator Rich Ellis provided an interview about the upcoming book. newsarama.com

Contest of Champions. Kabam! came to NYCC with a new trailer for their upcoming mobile fighting game. The trailer provides more insight into the story handled by writer Sam Humphries. The Collector possesses 50 Marvel characters sealed in crystals and it’s up to the player to choose their hero/villain and do battle against big bads the like of Kang and Thanos. More characters revealed in the gameplay trailer include Captain Marvel and Storm as the two heroins now look in the comics, as well as the more classic versions of heroes like Thor and Wolverine. The video also showed off a few famous Marvel locales where the fighting will occur, such as Dr. Strange’s Sanctum Sanctorum and Odin’s Asgardian throne room. The game’s release date is scheduled for December 2014. comicbookresources.com

Daredevil. What better place to show the first images for Hell’s Kitchen protector than the New York Comic Con. Before the series’ cast appeared at NYCC, Netflix launched their official show page. Netflix categorized the show as an “Exciting,” “Imaginative,” “Crime TV Show” and updated the plot summary:

“‘Marvel’s Daredevil’ is a live action series that follows the journey of attorney Matt Murdock, who in a tragic accident was blinded as a boy but imbued with extraordinary senses. Murdock sets up practice in his old neighborhood of Hell’s Kitchen, New York where he now fights against injustice as a respected lawyer by day and masked vigilante at night.”

At the show’s panel, Marvel and Netflix revealed the official cast including some notable Marvel characters such as Bob Gunton as Leland “The Owl” Owlsely and Vondie Curtis Hall as reporter Ben Urich. The panel also shed light on Rosario Dawson’s unknown role in the series, now known to portray Claire Temple, a character known as the Night Nurse who aids heroes like Daredevil when they need medical help. Marvel and Netflix then provided the first look at Daredevil in his earlier, black costume. He sported this outfit in the comics before donning his more traditional red suit, so it’s assumed he will appear in the red costume by the end of the show as well. Artwork featuring the more ninja-like appearance accompanied the cast announcements and promotional pictures as well. superherohype.com

Guardians of the Galaxy. Stephen Wacker, Marvel’s head of animation, confirms that a Guardians of the Galaxy series is coming to DisneyXD and that it will pick-up where the hit movie ended. The series will feature Thanos as Marvel looks to build on what they’ve learned from their first batch of animated shows including Ultimate Spider-Man and Avengers Assemble. That main lesson being to go deeper while exploring their stable of characters and stories. Marvel also showed some test footage feature Rocket and Star-Lord. comicbook.com