Marvel Studios had a positive week highlighted by the Blu-ray and DVD release of Captain America: The Winter Soldier, as well as the first season of Agent’s of S.H.I.E.L.D. Meanwhile, the star of Amazing Spider-Man 2 is blaming the studio for problems with the movie. Netflix has set a month for the premier of their Daredevil series and there are some new Marvel heroes coming to Disney Infinity 2.0. 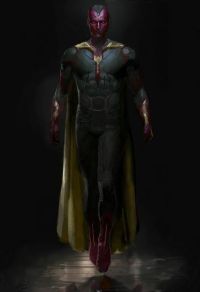 Avengers: Age of Ultron. Promising concept artwork for the Vision has popped up around the net, and it shows the android in his classic green and yellow comic getup. comicbookresources.com

The Amazing Spider-Man. Andrew Garfield had a lot to say about the state of his Spidey-movie franchise. Garfield did not state what sort of involvement his character would have in the upcoming Sinister Six feature, but he is excited for writer/director Drew Goddard’s take on the infamous ensemble. superherohype.com

Garfield had less positive things to say about Sony Pictures, the studio behind the Amazing Spider-Man 2, blaming their cuts for the incoherent, messy story. “Once you start removing things and saying, “No, that doesn’t work,” then the thread is broken, and it’s hard to go with the flow of the story. Certain people at the studio had problems with certain parts of it, and ultimately the studio is the final say in those movies because they’re the tentpoles, so you have to answer to those people.” io9.com

Alex Kurtzman, one of the writers behind that Amazing Spidey script which Garfield “genuinely loved,” offered an idea on what fans can expect out of Venom, his next project for the franchise. “Venom is the representation of every line that will get crossed. He’s a much darker character.” superherohype.com

Captain America 3. Anthony and Joe Russo were busy fielding questions concerning the future of the Captain America franchise while promoting the Winter Soldier’s home video release. They promised that the next Cap movie will feature a big course-changing event similar to the rise of Hydra of Cap 2, and confirmed that a title for the third film has been in place for close to a decade. screenrant.com 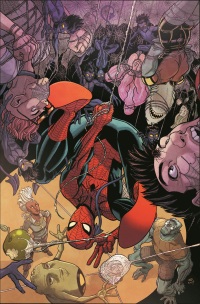 Spider-Man and the X-Men. In light of Wolverine’s impending demise, Marvel announced that a new flagship character will be taking over the Wolverine and the X-Men title. Writer Elliott Kalan and artist Marco Failla bring Spider-Man to the Jean Grey School for Higher Learning as a mutant guidance counselor, supposedly as part of Wolverine’s last wishes. newsarama.com

Hulk vs. Thanos. The upcoming arc of Savage Hulk, which pits the Green Goliath against the Mad Titan, Thanos, will be spun out as its own limited series event. The story will continue the events started in “Thanos Annual” and the original graphic novel, “Infinity Revelation.” comicbookresources.com

Disney Infinity 2.0: Marvel Super Heroes. Rocket Raccoon is the hottest selling figure for Disney Infinity, outselling the fan-favorite Frozen character, Elsa. To reward the fans for the impressive pre-sale numbers, Disney Interactive has revealed two new characters coming to the game. Falcon (based on his look in the comics) and Yondu (inspired by his appearance in the film) will be joining the other announced heroes in the Disney Toy Box. In addition to character descriptions, Disney released screen shots of the heroes in action and concept art for Yondu’s figure. comicbookresources.com

Marvel Heroes. The X-Men’s Southern Belle has made her debut in Gazillion’s Marvel Heroes. Billed as the most versatile character, Rogue has the ability to steal powers from both heroes and villains thus altering her skill trees, in addition to possessing the strength and flight of Ms. Marvel. Marvel Heroes has an overview trailer for the new character. marvelheroes.com

Agents of S.H.I.E.L.D. The second season of Marvel’s prime time television show returns Tuesday, September 23 and the build up to the premier is growing. Entertainment Weekly has revealed that Hayley Atwell will appear in the season premier as Agent Peggy Carter. No other details were revealed, but the appearance will most likely help promote the character’s personal upcoming ABC show. ew.com

Marvel also released the official synopsis and remaining guest stars for the premier episode two weeks out from its air date:

As if all of that news wasn’t enough, TV Guide has a first look at Atwell’s Carter in the premier episode. She is joined by a few more familiar faces as Neal McDonough and Kenneth Choie will reprise their roles as Howling Commandos Dum Dum Dugan and Jim Morita, respectively. EW had a fuller version of the photo. comicbookresources.com

Marvel Anime. The Japanese anime series Marvel Disc Wars: The Avengers will feature the Guardians of the Galaxy in the an upcoming episode, and the cosmic characters have been justifiably japanimated with large-eyed, big head rodents and a main character with spikey hair. io9.com

Daredevil. Showrunner Steven DeKnight spoke more on the darker nature surrounding the character of Daredevil who he described as being in a “morally grey ground.” The streaming series is expected to drop in May 2015. screenrant.com