Before becoming the scribe on Occupy Avengers, David F. Walker wrote Nighthawk, a six issue series that spun out of James Robinson’s Squadron Supreme. Much like the Squadron series, Nighthawk ended up cancelled but Walker had left behind a gem, a character near and dear to his heart. Her name? Tilda Johnson, the Deadly Nightshade.

Occupy Avengers: The Story Almost As Amazing As Me (3-4) 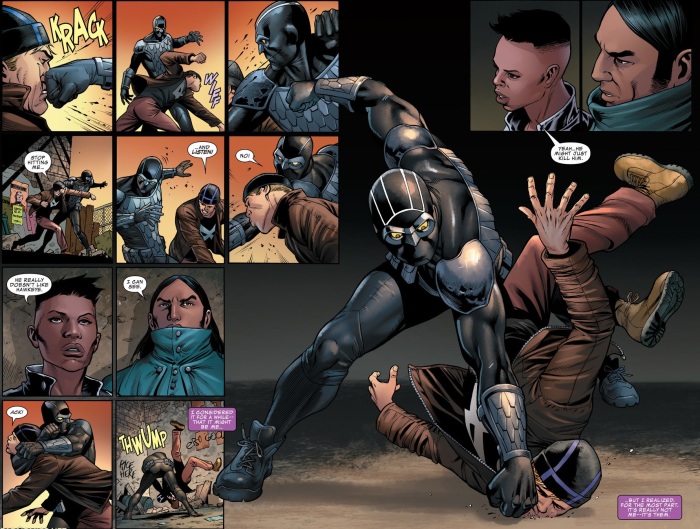 Some People Don’t Like Me, I’ve Had This Problem Most My Life: The adventures of Clint Barton and crew continue as Clint and Red Wolf find themselves in Chicago, turf of Raymond Kane, the vigilante known as Nighthawk. Occupy Avengers continues to keep Clint Barton front and center, and although no real ground is broke in character development, David F. Walker writes a great Hawkeye. His Barton sees the world through a lens of himself, but is endearingly eager to make a difference. His rapport with Nighthawk is excellent and does a good job of selling a history unseen on panel. The one weakness with Clint in this story is he seems to discover a secret plot halfway through but fails to deliver any insight on it. That makes the mission here, which is the weakest part of the story, seem unjustified. As is, it just seems like this was Walker’s way of pulling Tilda Johnson into Occupy Avengers.

Some of My Best Friends Have Been Robots, Least Judgmental People I Know: As I mentioned in my review for the first arc, Walker uses a modernized version of the two-in-one style of Solo Avengers. This time, the character to receive the secondary spotlight is Tilda Johnson. Tilda Johnson is a character who has a criminal history as the Deadly Nightshade, but Walker gave her a more heroic overhaul in Nighthawk. For fans of Nighthawk, Walker is finally able to deliver the punchline to the recurring joke of Tilda being sidelined. Walker writes a powerful Tilda Johnson, one capable of carrying her end of the series. Tilda is a nice reflection of Clint and Red Wolf. All three are arrogant and strong characters, but Tilda leans into it more than the two lost boys. The dynamic between Tilda and Red Wolf is one of the best parts of the story, although it matures the book considerably when nothing else does.

Another Special Missions Unit, Like We Need More Of Those:  Sadly, Red Wolf gets sidelined pretty hard during this story. He is to Tilda Johnson as Nighthawk is to Clint Barton this arc, which makes him a secondary support character rather than one of the titular team members. While Nighthawk is used well, the LMDs of Nick Fury Sr., Dum Dum Dugan, and Gabe Jones are not. They are literally cannon fodder for the big final battle, although watching Clint Barton stumble to remember his code phrases before Fury’s LMD is a lot of fun. The inclusion of Nick Fury Jr. at the end gives the book a grander sense of purpose than anything that has come before, ending the book on a strong note.

I Considered For Awhile It Might Be Me, But For The Most Part It’s Them: This arc sees the artistic team gel better than the first. Walker and Pacheco find a way to create compelling fight scenes by jumping between characters in a multi-paneled layout. Rafael’s inks do a solid job of making hits look like they hurt, especially when a guy is shooting arrows into another character. Coupled with Will Quintana’s unnatural color palette during the fights and these fights work way better than the first arc’s. My favorite fight scene is the throw down between Clint and Nighthawk, where the script keeps cutting back to Tilda and Red Wolf’s commentary from the sidelines. Carlos Pacheco fills his panels with gritty detailed backgrounds, and when he does not, Clayton Cowles does a nice job of filling negative space with word bubbles. It is just a shame that the first two thirds of the fourth issue feel the need to say the same thing repeatedly. 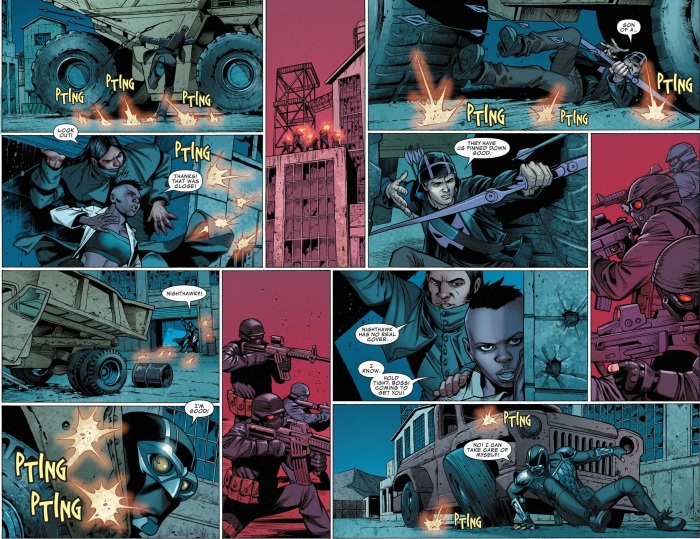 Conclusion: Despite a stronger showing from the artistic team, I prefer the first arc. There are hints that perhaps this arc is more central to the series as a whole, but failure to expand on those hints makes it seems as if this was a rescue mission. Although Tilda Johnson is a strong character, it still feels like this series was sidelined to recruit her and offer closure to Nighthawk fans. The series is still a strong addition to Marvel’s lineup and the next arc will see the addition of Gabriel Walta, fresh off an award winning run on The Vision.