Cyclops stood rigidly; staring down an army of A.I.M. soldiers through the red haze in which he saw all things. The A.I.M. beam gunners and lumbering crushbots advanced slowly on the mutant leader. A group of students cowered behind Scott Summers, headmaster of Xavier’s School for Gifted Youngsters, as he alone faced down the intruders.

Moments earlier, the A.I.M. force had been teleported directly into the school grounds by their twisted leader, M.O.D.O.K., a man mutated by the Advanced Idea Mechanics think tank to be more head then body. His grotesque figure hovered over the grass in his rocket chair. The evil scientist had infiltrated the peaceful school for reasons unknown and had brought along two other big bads: The Living Laser and the Rhino.

Seconds after the malcontents arrived, a motley collection of heroes followed. They were led by the space-faring, cosmically-powerful Silver Surfer, who charged ahead on his chrome surfboard. Loki, the untrustworthy Asgardian god of mischief, dashed in next surrounded by a half-dozen mirror images of himself. Two incarnations of Ghost Rider, the demon-hunter with a flaming skull, came last on roaring motorcycles which were also on fire. The group of unlikely defenders assisted Cyclops in dispatching Laser and Rhino in a quick and orderly fashion.

M.O.D.O.K., the oversized-brain behind the attack, had teleported away amid all the bedlam. Cyclops turned and ordered the other heroes to follow and lead the mad scientist away from the school before he could sow anymore chaos. Silver Surfer and the others took off after the villain before he could vanish once more.

Cyclops’ visor began to glow red once more as his mutant gift – powerful, optic beams of concussive energy – readied to pour forth from his eyes. Now it was just Scott Summers, his students, and a handful of unlucky A.I.M. soldiers who were about to learn why you don’t mess with an X-Men.

It’s been a while since I have checked in with my X-Muse, Cyclops, and a lot has transpired for the oft-tested mutant in that time. For starters, Cyclops has been laying low since basically committing patricide at the end of the Avengers vs X-Men story line in 2011. He formed a new version of the Xavier’s School at the old Weapon X facilities (ha, take that Wolverine!) and began recruiting new mutant students. His powers were broken after being possessed by the Phoenix Force, until he recently learned it was a result of his body being infected with nanotech sentinels.

Several of his closest friends and allies could no longer stand the mere mention of his name, and more than one mutant harbored thoughts of revenge on Professor X’s murderer. S.H.I.E.L.D. placed Cyclops at the top of their most wanted list and a new batch of sentinels – traced back to the spy agency – had been unleashed on his band of rogue mutants. Still, there were those that supported the beleaguered leader and took up the “Cyclops was right!” mantra, myself included.

Also in the time since my last look at Slim, Gazillion’s super-addictive, super heroic, super-actiony role playing game, Marvel Heroes debuted, and luckily Cyclops is well represented in that game. I have spent the majority of my time playing as Scott in the game’s first year of availability, recently hitting the max level cap of 60. I have had a blast running around classic Marvel landscapes such as the Savage Land, Madripoor and the streets of New York with my uncanny avatar. I have dressed him in his most popular threads, mainly switching between the classic ‘90’s Jim Lee look and the John Cassaday Astonishing garb. My optic powers crush low level mobs, as they should, and there’s a healthy dose of leadership buffs and passives that aid the team in battle, again, as there should be.

I could go on and on about the effort Gazillion is making with the details of this game, not just with Cyclops, but with the rest of the Marvel heroes they have assembled. As of right now there are 36 playable characters, with more characters added on a consistent basis, such as the upcoming Star-Lord and Rogue. So far, the game is everything I had hoped it would be back when Marvel originally announced a dungeon crawler game set in their universe spearheaded by David Brevik, the creator of the Diablo series.

I have enjoyed my time with the game so much that the little tale at the start of this article was even inspired by an experience I had during an X-Defense challenge in which I participated. It felt great to hold off waves of bad guys using Cyclops’ optic blasts while losing no students as my teammates chased down M.O.D.O.K. But instead of focusing too much on game mechanics, the clever comic-based unique items and what some may consider video game minutia, I’m going to probe the prose of the game, and reflect on how my hero was greeted by the other heroes in Gazillion’s version of the Marvel Universe.

The first thing to note is that while storylines in the comics can play a part in Marvel Heroes, the mythos the game follows is not beholden to the current comics. For example, Jean Grey is alive and well, flying around in all her Phoenix glory, Thor remains worthy of his own hammer and Magneto is more-or-less firmly in the villains’ column again. So there will naturally be some quips and comments that don’t align with current stories, but still ring true to the basics of the characters.

Since we’re talking about Cyclops and Jean Grey was mentioned, I might as well begin with the overly-complicated relationships in which he finds himself. Jean, Cyclops first love, is not quite as dead as she has been in this game world, so it casts some serious issues with Emma Frost, his most recent paramour in the comics. The dialogue Scott shares with Jean is a fairly decent representation of their relationship. There are two references to the super heroics interfering with their time together, one fond remark about Jean being a sight for sore eyes, and of course one comment condemning any interaction with Wolverine: “Have you seen Logan? No? Good!”

The sight of Emma elicits a similar range of emotions out of Scott as well. He can either firmly order her to stay out of his head, compliment her on her ability to complicate things, or he may fondly remind her that she doesn’t need telepathy to know how he feels about her. To say Cyclops’ relationship with Emma has been strained since Avengers vs X-Men, would be putting it mildly. Cyclops choked-out his lover to gain full control of the Phoenix, and since that event, Emma’s powers have been broken as well. Add to that that the teenage version of Jean Grey has been brought forward in time and is currently training at Cyclops’ new Xavier School, then things get more complicated than ever before between the diamond-skinned diva and the main man she has loved and supported through all his missteps.

Emma remains loyal to Cyclops in the comics though, and while at his side she continues to train the new team of Uncanny X-Men. The White Queen also has not lost her knack for scant uniforms, ditching the white leather in favor of black this time. She seems to even have influenced the wardrobe choices of the younger, mutant Queen of Limbo, Magik. 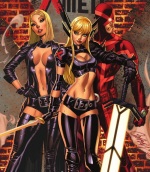 Magik has become one of Cyclops’ most loyal generals so it was a no-brainer for me to pick her as my first team-up character in Marvel Heroes. In the comics, her portals and demonic-side have come in handy on more than one occasion for the team, including breaking their fearless leader out of prison. In the game, her demons and swordplay allow Cyclops to sit back and pour on the optic blasts. Magik has seen some dark stuff in her days, and it’s nice to know the man she trusts to lead mutants through their tribulations is their rightful leader, Cyclops: “I’m glad someone is serious about this, Scott”

Colossus, Magik’s protective, older brother, has seen some dark days because of his loyalty to both Magik and Cyclops. Colossus’ downward spiral and Nightcrawler’s death during the Second Coming event in 2010 were two of the more tragic sacrifices during Cyclops’ reign. Both of these characters are in Marvel Heroes, and Colossus, free of his ties to Juggernaut, has joined his recently-resurrected, furry friend in the Amazing X-Men comics. Hopefully these natural, peace-loving mutants can eventually help bring Scott out of the shadows and support him when he must clear the air with the rest of the X-Men. Cyclops was the only original X-Men around when they had first joined the band of merry mutants, after all. “Hey Colossus, how’s your throwing arm?”

As mentioned previously, Cyclops is paid a respectable amount of attention in the leadership department, thanks to his powers and buffs. He is also hard on himself in the game, much like in the comics. The majority of his general comments are about training, determination and always trying to do better: “I should have done that faster,” “I’ll do better next time,” and “The Danger Room training pays off.” With quotes like, “No time to celebrate,” and “Take a moment, okay, moment’s over,” it’s no wonder so many view Cyclops as a stick in the mud. But it is that unwavering determination that makes him the perfect leader for preserving the mutant race.

And if there was one way to affirm your role as a leader, it’s to get the seal of approval from Captain America himself. “Leadership isn’t easy Scott, but you handle it well.” That quote always makes me smile, especially considering how recently the two characters were at odds in the comics. And there are plenty of other enjoyable interactions with characters outside the X-Men universe. Silver Surfer tells Scott that he has met his father, Corsair, the space pirate and leader of the Starjammers. Conversely, Cyclops’ comment towards Spider-Man, my favorite character of the non-X-Men variety, is unpleasant. “Spider-Man, can I just say, I’m glad you’re not a mutant.” That’s sad and uncalled for, Scott.

Cyclops also has several entertaining barbs when facing down familiar bad guys or starting quests. Magneto and the Brotherhood obviously conjure up some angst, but my favorite is Cyclops’ reaction to Mr. Sinister and the rest of the Savage Land mutates: “For the sake of all mutants I WILL stop you!” It is one of my greatest desires (sadly, never to be realized I’m sure) to see an X-Men movie focused on Mr. Sinister and his obsession with the Summers’ bloodline, building towards an Apocalypse movie. It would be the perfect movie series for bad guys and stories which revolve around Cyclops and his main supporting characters. And there would be no need for Wolverine!

Sadly, like with everything else, Cyclops can’t seem to get out of Wolverine’s shadow. He asks Reed Richards of the Fantastic Four how he deals with his team’s loose cannon. When Cyclops breaks crates and computers around the level he scoffs that he’ll “just blame it on Logan,” and when he impatiently stands around in the game he wonders if the team is waiting on the short-tempered and short-statured mutant. Even when traveling to Madripoor he comments that he “can see why Logan is such a fan of this place.” But don’t worry, Cyclops gets the last laugh when encountering Wolverine: “Get a haircut, Logan.” Zing! And people say Cyclops doesn’t have a sense of humor.